"Supergroup” isn’t a word that often sits well with a lot of music fans. For some, it conjures thoughts of bloated egos battling for creative control. For others, it brings to mind flash-in-the-pan projects that lacked a lasting impact.
William DuVall, frontman for Alice In Chains, is ready to change everyone’s opinion on the subject with Giraffe Tongue Orchestra (GTO). DuVall, joining forces with Brent Hinds, lead shredder for heavy metal giants, Mastodon, and Ben Weinman, founder and lead guitarist of hardcore legends, Dillinger Escape Plan, is already generating incredible anticipation among fans and the press, which has fondly and excitedly dubbed them a supergroup. 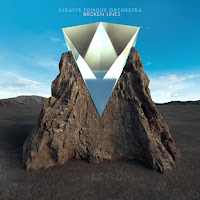 They have just released their début album, 'Broken Lines'. The video for single 'Blood Moon' is below
GTO’s debut album promises to show and prove what this supergroup can really do by unleashing a sonic onslaught on all who are ready to rock! Don’t just take our word for it, the hype is real.