ALBUM REVIEW: First Cruzh album will aim for the head and heart


You will not be able to listen to this album without feelings of Journey, Survivor, Y&T, Def Leppard, Europe, Bon Jovi, Babylon AD, Baton Rouge, and so on. It’s as if Bill and Ted kidnapped a glam band from the 80’s and deposited them in Sweden to form a band on the condition they would not call themselves The Wild Stallions.


It could nearly be termed suave rock as it’s smooth as silk and full of ballads. 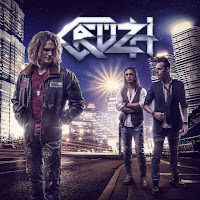 The first track “In N’ Out Of Love” feels like the love child of ‘The Final Countdown’ and ‘Livin’ on a Prayer’ being sung by Joe Elliott. It is a great if confusing tune purely for the reason as outlined. If you are a child of the 80’s you can imagine yourself at the school disco waiting for the ‘rock’ section coming on and it would be something like this. It’s almost nostalgic.


Then comes the title track ‘First Cruzh’, another rocky AOR tune sounding like it’s about to pour some sugar on you. Still it’s a good solid sugar coated tune that will at least make you smile if nothing else.
You can just see them with long blond hair being whipped round by wind machines and the camera zooming all over the place getting different angle shots as all is darkness but the powerful backlighting. Ah, great times.


In comes the heavier (for an AOR track) rockier tune ‘Aim for the Head’, which drives along with melodic sophistication. A great foot tapping and head nodding song. Again with that slightly up beat feeling running through it even though you’re being warned of some sort of devil woman who will break your heart. Man up, you’re a metalhead!!


The ultimate schmaltzy track comes in the form of ‘Anything for You’ which will have you searching all over for a lighter as you feel the uncontrollable need to wave it slowly in the air. Not a good idea if you’re listening to this at work or on the bus. This is the type of track a metalhead will la, la, la along to show their ‘crush’ how soft and fuzzy they are on the inside, beneath the metal stud laden battered leather jacket and skull and torturous writhing fiery demon tattoos. And no, that’s not tears – just something in the eye. Seriously. Bugger off while the melancholy sets in.


Next up is ‘Survive’  that again has you thinking of Def Leppard. You may start seeing a pattern here. Still, it’s a good solid track with a driven pounding beat.


Cruzh now ask you to ‘Stay’.  Heavy on the piano, smooth singing and gospel like lyrics this track would do well as a praise song in a modern worship service. Even with that it is a very pleasant tack to have on in the background. This is not a criticism – it’s a comfortable tune. Obviously not if you’re a hard rocking metal meister. If glam/AOR is your bag this is a good intermission song letting you know you’re halfway through the album.


Now it’s ‘Hard to Get’, with once more sugar and honey are in abundant supply.  It’s perfect for an 80’s RomCom title track. Again with its upbeat rhythm it’s a joyous song that will lift up even Beelzebub’s spirits.


Number eight on the album is ‘You’. No, not you, but ‘You’. More heart and soul driven lyrics that starts the song of like a slow light ballad before the guitar kicks in with a more rocklike anthem melody.  Perfect for that music mix you will inevitably put together for the beau you are trying to really get into a romantic mood.


And blam!! In comes “Set me free” with a faster pace and a shake your head rhythm to rock out to. This is a stuck-in-traffic-sunny-day-head-bang-til-you-notice-people-are-watching-you song. Again a good solid track perfectly delivered

The penultimate song ‘Before I Walk Alone’ has a vaguely jump up and down Cyndi Lauper feel to it. Once more a very likeable song with an upbeat melody that is catchy and fun.


The final track on the album ‘Straight From The Heart’ slows it down a bit and brings out the acoustic guns to give another love song gushing with the mushiest sentimental tropes.


There will be people who will avoid this whilst others will be drawn to it like a moth to a flame. It is an 80’s smorgasbord of AOR cheese that will have you retching and crying at the same time. It is incredibly well put together and polished in an incredible professional manner. Whilst many of the tracks would suit a wedding band Cruzh are anything but.


Overall, it is actually a great album that would do well in your music collection. Perfect for smootchy smootchy time.
Review by Ivor Whitten