NEWS: Half ofTenancious D? That'll be Kyle Gass with a new band

The Kyle Gass Band announce new album ‘Thundering Herd’ - and the press release is so good we had to re-produce it here!


Much like a hero who humbly shuns the term, Kyle Gass Band have done just this with the oft-used title Supergroup. A brotherhood of supreme abilities, conquering town after town with musical benevolence, they travel with one common goal: To share their collective genius with the masses, and have the best possible time doing it.

Rounding out the personnel in the current and most powerful line-up is of course, Kyle Gass: fearless leader, Guitar God, Tootsman, and wordsmith, as well as one half of the greatest band on earth! Next is Mike Bray, a redwood of vocal and guitar talent who’s gifts are festively wrapped and wantingly forced down the mouth-chimneys of each fan nightly. 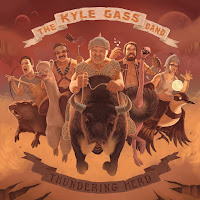 On lead guitar is John Konesky, a man of roughly average height, but above-average ability, his guitar work has often been described as having a spiritual, boarding on sexual, effect on men, women, and animals alike. On Drums is Tim Spier. As an accomplished cocksman and drummer, he became an obvious choice for the position when it became evident he was not only proficient in the material, but could discuss sports with Kyle. Then there’s Jason “Uncle Jazz” Keene. What can be said about his bass playing that hasn’t already been said about Ghandi?

Armed with a few years of new experiences they took to the studio in 2016 to record the much anticipated follow-up titled Thundering Herd. A masterfully curated collection of yarns, myth, and whimsy, aiming to bring the listener with them as they travel the globe in search of experiences normal humans have only dreamt of. Tales of Women, Brothers, Gypsies, Uncles, Moms, and Ham Sandwiches, together paint a picture of what these ManGods experience on the daily.

2016 shall prove an interesting - and some would say historic - year for the band. With the new album to be released in September, followed by as much touring as their aging frames can handle. The men will battle excessive flight, fatigue, weird European food, toilets that appear strange to them, language barriers, and the occasional Orc, as they lay waste to every club and bar that will have them!