WHEN it comes to iconic bands still on the go in the second decade of the 21st Century Blue Oyster Cult are among those that still stand tall, and still deliver live.


Playing in Ireland for the first time it was the opening of the 40th anniversary of the release of Agents of Fortune album. 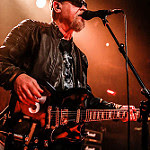 That album was the breakthrough that put the band on the proverbial chart map, and it was the moment when the band took the soft rock and added a sense of menace.


The Dublin crowd reflected the age of the album with the general age of audience – very few were under 30, and the majority were well over the 40 mark. That didn’t dampen the enthusiasm one single bit.


There was a general sense of celebration, not just because of the first Irish date, rather it was the anticipation of an audience willing the start.


Added to this was the band’s line-up. Eric Bloom, Donald ‘Duck’ Dharma, Richie Castellano, Kasim Sultan, Jules Radino and the return of the one and only Albert Bouchard on drums.


Even the most cynical of reviewers, members of the crowd and photographers couldn’t hide their excitement…and when you see bar staff singing along to ‘Don’t Fear The Reaper’ you know the band were doing something right.


Blue Oyster Cult performed with a sense of ease and a sense that this is where they are comfortable.


All tracks, not just the so-called hits were delivered with precision, yet with no sense that they were slavish – several times Bloom and Dharma exchanged licks that were slight improvisations. These weren’t mistakes, almost as if they wanted to keep the songs fresh for themselves. 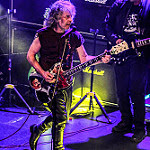 From the moment that they opened with ‘This Ain’t The Summer Of Love’ to they left the stage to unanimous applause they were too cool for most to comprehend.


They may be aged, but they have aged well. Moving around the stage as if sliding along while exchanging looks with themselves and the crowd, and no clichéd cajoling the crowd to join in.


There were moments when even the soft tones of ‘True Confessions’ had moved into the region marked ‘threat’.


As to ‘Golden Age Of Leather’ it had the real sense of musical fetishism.


In all sets there are stand-out moments. For some it was the amazing guitar interchanges after the intermission…yes there was an intermission, probably for the sake of the audience as the band.


To stand beside a guy in his late 50s shouting ‘Balthazar’ is a moment to savour.


Blue Oyster Cult stand head and shoulders above the pack, ease themselves through the songs without sounding like an on-stage jukebox and have a back catalogue that is familiar to all fans.


Now they’ve done the ‘Agents of Fortune’ anniversary many are wishing they’ll do a ‘Cultusaurus Erectus’ and ‘Fire of Unknown Origin’ anniversary tours.
Review by Jonny
Pix by Darren
This review first appeared on Jacemedia.co.uk
Posted by Jonny at 6:26 pm