ALBUM REVIEW: Are Twilight Force taking the piss or riding to glory on Heroes of Mighty Magic

BACK in the 70s and 80s when a band wanted string sounds they had to hire a symphony orchestra, or get in some mates who knew the difference between a violin and a viola. Nowadays, some synths, studio trickery - hell even a keytar - you can pretty much have the orchestra at your fingertips.

All of which has contributed to the proliferation of band with the tags 'symphonic', 'power' or even 'adventure' before the mighty word 'metal'. 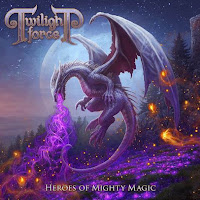 However, whether any of the proponents of these 'styles' are any good is something that relies on craftsmanship, songwriting, and for the listener that old-fashioned suspension of disbelief from the listener.

But, there are times when even the most devoted fan stands back utters the abbreviation "WTF!"

On first listen to Twilight Force's 'Heroes of Mighty Magic' you could be tempted to snigger, advise them to get an orchestra in to play and reign them in, and then give them a mighty slap around the back of the head and urge them to "wise up!"

But, we are not hasty reviewers. No, for to dismiss them out of hand on one scant listen would be unfair and not, well just not metal...

So, we raised a mug of mead (or three) and made ourselves comfortable and listened again. And, again. And, again. Then finally it clicked. These Swedish rocker's efforts are meant to be taken with a large pinch of humorous salt, a dig to the funny bone and appreciation for the over-the-top orchestration and musical histrionics.

This is firmly planted in the fantasy genre of rock - dragons, wizards, noble warriors etc.

And, this is where you have to really suspend disbelief, set aside the sub-Tolkien plot and go with the flow. Let the ridiculous nature of it all be a subject for escapism.

There is, however, no escapism in terms of the musical effort. This takes the whole scope of power and symphonic metal to a new level.

There are more axe fireworks than an explosion in a guitar factory, more keyboard sweeps than the waves around Hawaii, and vocal dexterity that would confuse Dynamo...

Chrileon's talent in lung-busting singing is only matched by Lynd's lead work and the incessant rhythm of Aerendir (guitar), Born (bass), and De'Azsh (drums) keep the album rolling along. The keyboards of Blackwald are to the fore throughout, often duelling with Lynd.

Songs are prefaced and punctuated with almost folksy elements and there is no shrinking away from taking songs to the lengths Twiligh Force wish to with 'There And Back Again' clocking in at 10 minutes plus and title track 'Heroes of Mighty Magic' just four seconds short of the 10 minute mark.

The latter features a stand-out guest slot from Joakim Brodén (Sabaton) and the former has Fabio Lione (Rhapsody of Fire) stretching his vocal chords.

While these tracks allow the band to elucidate further on the vision of Twilight Force, other tracks such as 'Keepers of Fate' and 'To The Stars' can seem a little samey, unless you listen to them in the context of the album's story line.

And, the story is marred - seriously marred by the narration that occupies more than six minutes. The spoken piece of 'Epilogue'. If you have to tell the tale in words, there must be nagging sense that the story arc hasn't been completed.

It could easily have been cut out and let the martial music and choral elements of 'Knights of Twilight Might'.

Taken overall Twilight Force have produced an album that stays true to epic metal, has its tongue firmly thrusts into its cheek, and importantly rides to fantastical glory...