The band said: "This time, we decided to take our time to pick a new member. We could've come up with the idea to hire Makki as our new bass player much earlier, since he has been on the road with us as our tour manager for many years and has already toured the world on his own. He has always been a part of the family and now we are happy to welcome him on stage with us!" 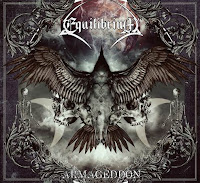 “Twelve years later I am standing on stage together with EQUILIBRIUM. I am very grateful for the long friendship with the EQUI-family and I can't wait for the upcoming adventures and shows together with the best fans in the world! See you on the next gig..."

Makki will join Equilibrium on stage throughout their upcoming European festival run and autumn tour dates.

Recently, the band released the lyric video for the brand new track ‘Born To Be Epic’ via YouTube -  see the bottom of the post.

‘Born To Be Epic’ is now available as an instant-grat track when you pre-order ‘Armageddon’ digitally: http://bit.ly/EquilibriumDigital

The lyric video for brand new track ‘Prey’ is already on YouTube. Check it out here.


This time, the album was recorded, mixed and produced by René himself and was mastered by Maor Appelbaum (Los Angeles). The cover artwork was again created by Skadi Rosehurst.

‘Armageddon’ will be released on August 12th, 2016 via Nuclear Blast Records.
Posted by Jonny at 4:13 pm