LIVE REVIEW: Heft and heaviness as Overoth, Cursed Sun and Wardomized bring the metal to The Limelight

SATURDAY evening - a time to wind down after a hard week's work. Maybe check out the evening football match...or chug a beer or six at the weekly celebration of all things heavy at The Distortion Project in Limelight2.

Of course, it is an almost weekly gathering of the devoted, a semi-religious shamanic experience, best epitomised by the headliners on Saturday (20th August) Overoth, with stage layered with smoke, candles and incense...

As usual Mr Loveday pulled together three relatively diverse acts that complimented each other in the heft and heaviness.

Openers Wardomized have quite a challenge to enliven the slowly filling venue and do themselves no favours by opening with two tracks emphasising their inkling towards sludge, doom and grind. Such a slowed down beginning would be better suited to the middle of their set with 'Strained' a tune that could serve as a breather...

The band seem more comfortable - as well as the audience - when they up the pace. 'Tribal Warfare' and the fun 'Suicide Death Rock' get things moving before new track 'Red Death (Flows Through My Veins)' showcases ambitions for the future.

Wardomized have come far over the last 12-14 months. It's time for them to knuckle down to a process of continuous improvement if they want to shift up the bill.

Cursed Sun have played all parts of any bill and are always comfortable on stage. With forthcoming ep 'The Amygdala' almost ready for release there is a sense that the band are gearing up for a major step forward. Tracks from the ep were aired tonight, including two songs that seemed perfect for the live setting, the opening two, 'Primordial Chaos' and 'Breeding from Bleeding'.

Overall they manage that delicate balance of composure and craftsmanship that leads to a combustible set, sparkling with energy and a metallic joie de vivre.

Jonesy is the focal point of the contemporary heavy edge, as the sound rages around in wave after wave; melody punctuating the assault as Jonny's solos slam with more edge and volume compared to some recent outings.

Indeed this is a performance that has a freshness about it. Sure, as expected Jonesy joins the crowd, sure the rhythm section is tight as a shark's ass, but what was noticeable was the hunger. They have ambitions and they have the poise to position themselves to realise those ambitions.

Similarly Overoth are realising their ambitions with each and every performance - the drama is but a stage dressing as much as the smeared faces. All would be for nothing if the music was not a force of nature.

Andy is a commanding presence, towering over the audience like a colossus, cowering the unbelievers. His bass the anchor holding the delivery of the songs that are attack the venue as if faced with a row of enemies instead of acolytes at the band's altar of death.

'Kingdom of Shadows' is the most familiar of the tunes, but 'Winter of Iniquity' and 'God of Delusion' were stand-outs, with Daniel and Andrew intent on a delivery of synchronicity few can surpass.

It would be easy amidst the formidable trio at the front of the stage to overlook the contribution of Jay on drums, but on the likes of the début song 'The Keeper' and opener 'Sigil of The Empty Throne' the solidity of the beating is added to with flourishes and punctuation.

New track 'The Keeper' holds it place in the set, and with the band ready to release a new album it bodes well for their continual ascent towards the death metal throne.

Review and pics by Jonny (reproduction by written permission only) 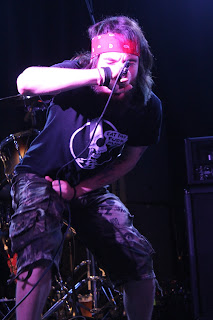 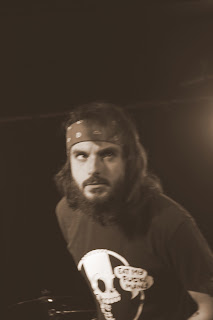 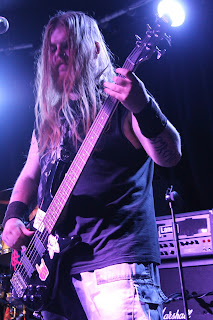 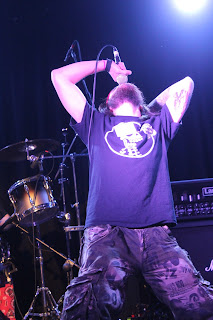 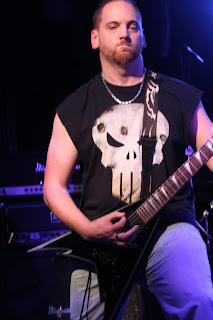 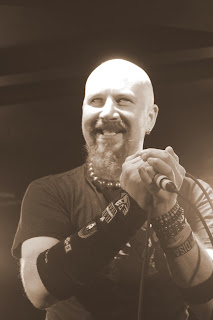 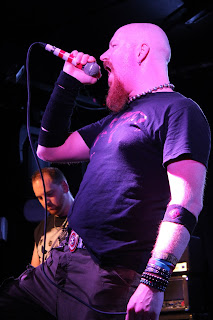 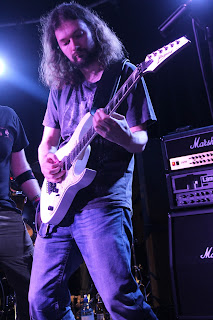 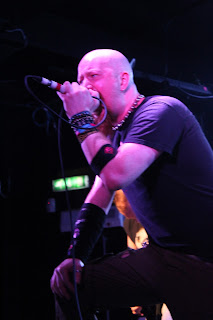 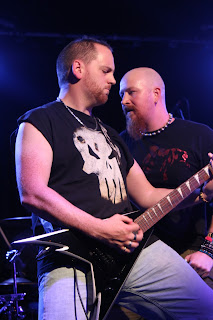 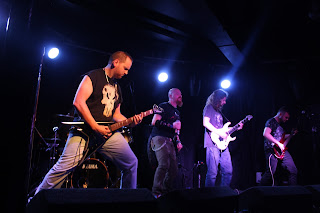 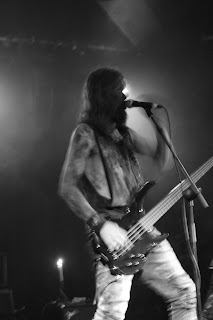 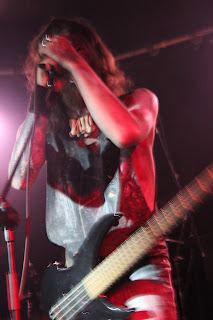 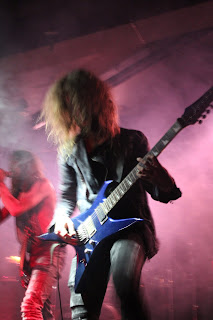 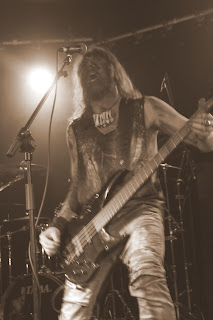