ATTICA Rage descent upon Belfast’s Limelight2 on October 22nd in a power line-up that includes Donum Dei and Conjuring Fate.

Ahead of the UK and Ireland tour the band have released their new single ‘All Summer Long’ via Off Yer Rocka Recordings along with a bonus live track of fan-favourite ‘Crazy Horses’, a rocked-up cover version of The Osmonds' 70's chart hit. 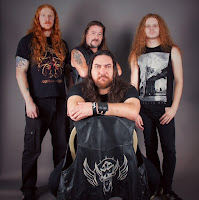 Watch the video below:
You can buy on iTunes: https://itunes.apple.com/…/all-summer-long-sin…/id1148029101 or the full digital catalogue: https://atticarage.bandcamp.com


All Summer Long is the second single taken from the new Attica Rage album Warheads Ltd, available in CD Digipack & digital formats from Amazon, HMV, iTunes and all major music stores worldwide as well as direct from the band at http://atticarage.bigcartel.com


The video for ‘All Summer Long’ was filmed on location at Ardeer Beach, Stevenston in North Ayrshire, Scotland on one of the hottest days of summer.