THE revolving door musical collective that are The Dead Daisies follow up their 2015 release ‘Recolución with “Make Some Noise” and a revised line up.


Gone are Richard Fortus and Dizzy Reed to the Guns ‘n’ Roses revival and in comes ex Whitesnake guitarist Doug Aldrich with the result that they have produced their best album to date.

Starting with a riff and bass line AC/DC would kill for these days ‘Long Way To Go’ the intent to deliver classic Hard Rock is fairly clear. With Corabi sounding very like Steven Tyler and Mendoza and Tichy hammering out the rhythm section it’s a fairly in your face beginning.


“We All Fall Down” has a more modern vibe to it but keeps the energy and pace going.
The tempo slows slightly on “Song And a Prayer” but continues the hard rock groove. Telling the tale of the pitfalls of seeking fame and fortune in the bright lights of the big City it is a sort of cross between Aerosmith and Guns ‘n’ Roses in sound and subject matter.

A fairly raucous punk style riff that is rocked up a bit is next up in the form of “Mainline”. Mendoza and Tichy furiously drive this song with Aldrich providing the hooks and thrills.


The ‘We Will Rock You’ influenced and title track “Make Some Noise” thumps its way out of the speakers next. A song that lyrically and in terms of composition was clearly aimed at the live environment. Full of yells and hand claps it’s good old fashioned, sing-along Rock ‘n’ Roll.


The Dead Daisies usually throw in a cover or two and first up is a belting version of Creedance Clearwater Revivals’ “Fortunate Son”. Corabi does a fine job on vocals and doesn’t try to out Fogerty John Fogerty. The slight increase in tempo from the original gives this old classic a new lease of life.


“Last Time I Saw The Sun” is supposedly the tale of life on the road with endless hotels and stages all starting to look the same. Bit strange as this reviewer saw the band in broad daylight in Belfast! That aside this song could easily be an Aerosmith song with its quick tempo. Aldrich gets to flex his muscles on this too...great song.


“Mine all Mine” is another up tempo song driven along by Mendoza and Tichy and with some more outstanding guitar work. Guaranteed to get the toes tapping this one.


The gritty and groove laden “How Does it Feel” demands to be recognised. More superb guitar work and a simple but effective chorus make this as catchy as one of those Pokemon thingy’s


“Freedom” catches Aldrich in full on shredding mode and the by now ridiculously manic drumming and bass work by Tichy and Mendoza may make this the stand out track on the album.


‘All The Same” has that classic AC/DC bass line to start. A straightforward rocker with a great gravely vocal performance from Corabi. Just as you think the song, about trying to tame a wild woman, is about to end they fire in a faster full on outro. Great ending. 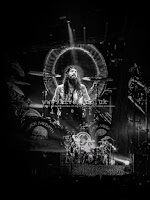 Album closer “Join Together” is a fairly true to the original cover of the classic ‘The Who’ song. With harmonica and great use of a voice box this has a really anthemic feel to it and if you were lucky enough to catch The Dead Daisies live on their current tour you will understand that totally.


If classic, no frills Hard Rock is your thing then “Make Some Noise” is a must have album.
Review by Andy Gillen 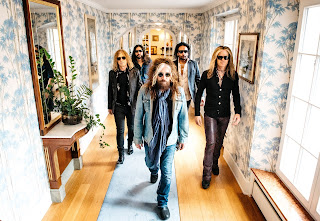