SWEDISH power metal blasts onto the world stage once again this year as Sabaton land with “The Last Stand”. Well known for their anthemic metal songs retelling stories of war is this latest album good enough to get your blood up for the battle ahead?


Hell yeah, it is!
This album is finely crafted round inspiring songs of heroism, struggle and battle. This album is filled with songs of battles throughout history where hope has gone and all that is left is the steely resolve of the stubborn warrior spirit.   Each track on this album has razorsharp riffs, pounding drum patters, catchy choruses and deep melodies - intense, bombastic and invincible.
This immediately becomes clear with the first track “Sparta” recounting the battle of Thermopylae where the Spartans valiantly resist the oncoming swarms of the Persian horde. This is Millar’s “300” in metal form and it delivers in classic Sabaton manner even down to the HOO HAA running through the chorus. It’s wonderfully epic in scope.
Next is “Last Dying Breath” retelling of the 1915 defence of Belgrade which blasts through the explosive laden battlefield full of crescendos and a driving metal melody.
Then comes a strange one for Sabaton as refrains of bagpipes come through laying the way for a fast paced catchy song recounting the Battle of Bannockburn with “Blood of Bannockburn”. And just as you come to terms with the bagpipes you will be assailed with the sound of Hammond organs almost as if Deep Purple have come along for the fight too. Strange but as a song it works beautifully as a whole. This will be a rallying call for live shows for sure.
Leading on from this is a very stirring narrative interlude “Diary of an Unknown Soldier” describing the dark horror of war at the battle of Argonne in World War One over a driving hard industrial beat to take you into “The Lost Battalion” as Broden’s powerful voice rallies the troops for the final assault. The industrial beat continues to drive the song onwards through the fog of war whilst the chorus exhorts you to stand your ground and do or die, there is no surrender. A superb anthem that will resonate round any gig. 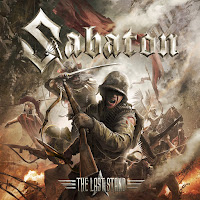 Next you travel from the earth packed trenches of Europe to the sun burnt savannah of southern Africa with “Rorke’s Drift”, a fast paced song recounting that famous battle between a Welsh regiment of the British Army at an Irish Farmstead fighting heroically against overwhelming odds of a large army of brave Zulu warriors.  On this track Sabaton deliver a fast paced song, swift as a spear and is on target with metal laden hardness. This song shows no mercy.
The title song “The Last Stand” is a prodigious metal track with heavy guitar and keyboards delivering the story of the 1572 battle of the Swiss Guards on the steps of St Peter’s Basilica. Sabbaton deliver a superb heavy chorus laden tune that will have you singing along and air guitaring and headbanging away to yourself in your house or car.
Coming next, “Hill  3234” stamps heavily onto a dusty Afghan hilltop with an weighty uptempo track retelling the story of the 9th Company 345th Independent Guards Airborne Regiment of the Russian Army battling against the Mujahidin.  Again Sabaton deliver an outstanding blistering song.
The song “Shiroyama” takes you to the sweeping landscape of Japan in 1887 where the ancient warrior caste of the Samurai faced their last battle as the way of the Bushido came to a bloody end. This keyboard loaded song rumbles along with a driving force and a fantastic pumping chorus.
Talking of pumping choruses the next song “Winged Hussars” also has pumping verses like the heavy gallop of a thousand warriors on horseback. It tells of the Battle of Vienna in 1683 where the Holy Roman Empire fought against the Ottoman Empire and is recorded as having the largest cavalry charge in history. Something you really get a sense of this throughout this song. Sabbaton just keep delivering powerful heroic metal and this is no exception. It is incredibly catchy, and you will headbang to this beauty.
The final track is appropriately entitled “The Last Battle” and recounts the strangest battle of World War Two as members of the Wehrmacht fought alongside the US Army to defeat a contingent of Waffen-SS assaulting Castle Itter in north Tyrol. Another rousing rendition from Sabaton of epic proportions. Superb stuff.
The album is out now and whether you are new to Sabaton or not, this is a cracking album with no dud tracks. All 11 songs are absolutely fist pumpingly epic. Just like Sabaton themselves this album is bulletproof.
You need to buy “The Last Stand”. End of.
Review by Ivor Whitten
Posted by Jonny at 9:00 am