EP REVIEW: Indominus rise from the ashes with Legion Within

THE path of a band is sometimes a strange one. But it takes a bold move for a band to change their name and add a different take on familiar playing. Such is the case with Indominus, who have risen from the ashes of For Christ's Sake.

With a new drummer the rest of the band have knuckled down and recorded an ep that stands proud and true to their ethos both lyrically and musically. 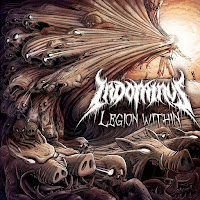 It is an ambitious move, and one fraught with risk. Thankfully it seems that it is a risk that has paid off. The 'Legion Within' ep is a slight departure from the For Christ's Sake doom/death sound, with more pacier tracks.

They have not yet parted way with some of their origins such as on the sludge like monster 'Backbone'. It is a track that threatens to grind you down in its weight. Given the previous track has a more thrash metal feel it jars at first until you see the ep as a whole, in which it sits well.

Overall the ep's sound is well managed, notable from the off as 'Leeches' launches the band down a ferocious pace. There is an almost classic Teutonic thrash feel to parts of it, with dropped guitar sounds and twin vocals.

Alan's vocals are well balanced throughout, but it is the emerging telepathy of the rhythm section that strikes a credible note. Drunmer Nathan's addition has perhaps given the impetus to greater link play with Mark (bass) and Logan (rhythm guitar).

This provides a layer for Simon's lead work to produce the runs that stand out with precision. 'Shadow' showcases that work, and its restrained melody section provides a nice contrast to the wall of riffs that threaten at times to overwhelm the work. It is a touch that shows growing  maturity in the songwriting.

That same guitar excellence is on display on the closer, title track 'Legion Within' - a contrast to the almost down-tempo feel at times. There is an echo of previous approaches, but with a new dynamic.

However, the stand out track is 'Fragile Existence', a nicely balanced piece of metal, with the bass riff rumbling along to propel the track into an area that they have not tested before.

It seems that the dates, earlier in the year in the Netherlands, have helped hone the work, and with more dates coming up - as well as a slot at Monsters of Rot - the band now have a chance to stamp their new identity.

It is by no means a perfect release, with some moments when a split identity creeps in. However, taken overall there is enough meat, and enough new elements to state that Indominus have risen from the ashes and are now ready to take it to the next level.

Legion Within is out on September 16th.

Email ThisBlogThis!Share to TwitterShare to FacebookShare to Pinterest
Labels: For Christ's Sake, Indominus, Legion Within