THIS job is always about the music, for older bands it is a reflection of where they are in their journey. For newer bands it is all about where they will stand with their peers and with debuts it can often be about sorting the wheat from the chaff, the rawness, the talent, the direction and making sense of it.


The holy grail for us is to stumble upon something unusual, different, something to shake up the industry in some way and my god in Kanzler & Sohne I think I have found it. The first I heard and saw of the band was one video and I was hooked. I could not wait to sit down and give this album a good listen.


There may be many influences you recognise immediately but never mixed together like this. This is huge people, does anyone remember Linkin Park hitting the scene? Well I reckon we have the next big thing to come out of Germany. They may very well get the obvious Rammstein references which is due to all the lyrics being done in German and some of the most industrial tracks but this is no copycat band. 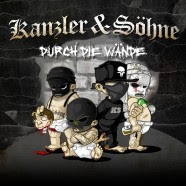 They deserve to stand alone and they deserve your attention purely based on the individuality that screams from Durch Die Wande. Metal/Rap has never sounded so crisp, dirty and diverse.


The album kicks off with “Lauf Los” and there is the Linkin park/ Red Hot chili peppers bastard offspring kicking in with some serious riffage. The lyrics are spat at you like 70s punk and filled with just as much hate.


“Shmerz” comes at you like a Metallica black album classic, mixed with slow and mean vocals, the chorus will beat you down but you will get up off the floor with a huge smile on your face. The title track is next with an almost thrasher style guitar attack. This breaks down into that Peppers guitar flick but that is not where the changes end, oh no, this has more twist, turns and tempo changes than a Maiden eight minute plus track.


“Ignorant” reminded me of Lost Prophets (yes, I know, nobody is meant to mention them anymore). It is far more upbeat and less venomous than other offerings on here but nothing is lost and everything gained in this little beauty.


Back to the heavier side for “Scheiss Drauf”, a great intro and this song builds to perfection and fast became my favourite track as it switched from all out to pure rap in the vein of Beastie Boys. “Haut” takes up the echo vocals, that sound we have heard Rammstein use and own like only they can. The vibe is very similar and another cracking track.


As “Brenn” starts I realise this album is flying by, 15 songs in the whole package with most tracks coming in at just over three minutes. It is fast, furious and utterly enjoyable.


“Parasit” has the heavy side back but this is more a pure rap song for me. The punk attitude is there even if I do not know what the lyrics are saying. In fact I found it very difficult to find out anything about this band without doing a crash course in German but this is what is so enjoyable about this album, I really don’t care what they are singing about but I will be doing some more research when I can find the time.


“Lass Ficken” keeps it ticking over with an almost Nu Metal backing track. The instruments do seem turned down but this just makes you focus on the vocals. “Mehr” Has the Linkin Park sound back. It is slower, more determined and it builds beautifully.


We are on the home stretch now and “ Wahnsinn” takes on an almost early 90s metal sound but you know that won’t last, the way this band transfers from one genre to the next is genius and I am just a little bit in awe that this is a debut release.


“Leben” sounds like a Staind heartbreaker. You can feel the depression dripping from the mouth of this angry singer. This one could be a massive radio hit as it has a huge crossover appeal, even kids in love with chart toppers(yes, those poor children, let’s pray for them) will get this track.


The Metallica chug is back with “Schmerz” and it runs through the full song. It is like one of those mash ups you see on social media, you know the ones that should never work but your head is bopping and your toes are tapping.


“Hammer” does what it says on the tin, a little brutal song that is a slow builder, a bit like a serial killer on the prowl and we finish it all of with “Abgefuckt” which I am sure you can work out where this is going. Even though I do not know the lyrics I can pick out each and every profanity as it comes out of my speakers. This is a cracking track to finish on and it seems a little tongue in cheek and a lot lighter than what has gone before.


If you like crossovers you will love this, if you like Rap/Metal you are going to be in heaven and if like me you just like good music with attitude and a whole sack full of new ideas you are in for a hell of a ride. This band are going to knock the industry on its ass.


This review originally appeared on partner site Jace Media
Posted by Jonny at 9:48 am