Northern Ireland has a long legacy of guitar greats, and when Pat McManus picked up his six-string to play Wilgar Rock and Blues Festival in Belfast he made sure to acknowledge his predecessors in a stunning set.


Less than six days after appearing to a packed blues stage at Ramblin’ Man Fair and a few dates in between, he and his band were wowing the crowd at the annual celebration of all that moves even the hardest hearted soul.

Hard working and dedicated the Pat McManus band may be, but they are also men who enjoy their time on stage, and have such a variety of material to choose from that they easily adapt their set list and still have the audience on their feet applauding.

The late Gary Moore has always been a man admired by Pat as evidenced by his poignant song ‘Belfast Boy’. Not only did that get an airing at the festival but he also played a stunning version of Moore’s ‘Still Got The Blues’. 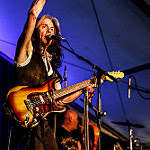 It was a set that not only paid tribute – Pat’s acoustic ‘Return of the G-Man’ tribute to Rory Gallagher was given a rapturous response – but some of Pat’s stunning solo work was also played to a delighted marquee.

With the Olympics just days away of the set Pat revealed that his fast and furious song ‘The Bolt’ had been inspired four years previously watching Usain Bolt’s sprinting glory. Usain may be fast, but Pat’s fingers are faster.

While Pat can play faster than any in his field, it is the fluidity of his playing across all songs that leaves an impression that he is gliding over the frets, whether it be on ‘Iona Sunset’ soulful or on Mama’s Boys ‘Needle In The Groove’.

Ably assisted by Marty’s easeful bass runs and Paul’s powerful drumming the set had been slightly shortened owing to time constraints, however that did not make it any less enjoyable.

Of course the fiddle came out for the anthemic ‘Runaway Dreams’ and a subsequent fiddle exposition of sheer class playing. 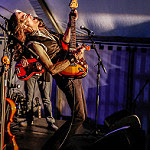 While many stand agog at Pat and the band’s abilities what can easily be over-looked is that all are built on solid song structures, riffs and an understanding that rock and blues may ‘feature’ solos, but there must be a scaffold in the tune for the individual parts to build upon.

And, it was the songs that shone as the evening sun sank over the nearby cranes of Belfast’s iconic shipyard. Steel? Pat has that in abundance, but he is also a man who rarely stops smiling. He enjoys the time on stage.

And, his appetite for playing remains undiminished as after playing the Wilgar festival he was heading to County Donegal for another set the following night….

This article first appeared on Jacemedia.co.uk