WHILE the trend has been of late for releases of cover versions - such as the recent run of Six Feet Under albums - the revolving door metal super-group Metal Allegiance have doffed their cap to those we have lost recently.

With the core of Skoknick, Menghi and Portnoy in place they drafted in three heroes to pay tribute to Lemmy, Bowie and Frey. 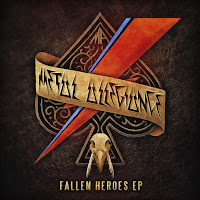 Released slightly ahead of the Metal Allegiance Bloodstock appearance it is a three-track homage appropriately entitled 'Fallen Heroes'.

But is it worth it? Is it - and dare we whisper it - cashing in?

All three tracks are hammered out with vim, with vigour, and with the horns raised to the great gig in the sky, where Lemmy, the Great White Duke and Frey are jamming and raising merry hell (Editor's Note: excuse the mixed metaphors please).

With Portnoy and Menghi laying down a rhythm beast and Skolnick adding flourishes and licks (including some of his jazz touches in places), it is left to the guests to hammer the rest down.

Troy Sanders strains á la Lemmy to extract every ounce of energy from a rousing version of 'Iron Fist' that takes the verve of the original and takes it up a notch. A glass of Jack and Coke will be well deserved by all the players after this.

Of course, Bowie will be remembered as the only man on earth who could almost be as cool as Lemmy, albeit in a different way.

Harkening back to his 70s heyday 'Suffragette City' is given the metal treatment, the glam elements stripped away to let the riff hold sway. Osegueda reverts away from his Death Angel tones to deliver a top notch version.

Also, it is a stirring performance from Arch Enemy's Alissa White-Gluz's who takes the intonations of Frey, gives it a metallic twist (with clean vocals). You feel compelled to join in the fast life with her and damn the consequences. And, that riff from the original Eagles track sounds so fresh, with just the right amount of ferocity.

This is just a three-track. This is not just any three track. It is a worthy metal salute to our fallen idols.