NEWS: Cradle of Filth down to writing next album

CRADLE Of Filth the UK’s most visionary and hellish outfit are currently writing new material. Satan is said to be hopping around hell in delight…


The band have been locked away for the past week in a studio in Brno, Czech Republic, working on the follow up to their 2015 opus ‘Hammer Of The Witches’.

The evening before embarking on their creative quest, rather vocal front man Dani Filth said the following:

"As a band we are very much looking forward to our writing session in Brno. It's going to be very inspirational to just bury ourselves away in a rehearsal room in the Czech Republic and knead our ammunition of razor sharp flesh-ripping sonic torments into sinister form.
“Hopefully when we emerge from our musical chrysalis one week later, something beautiful will be born. The new Cradle Of Filth album will be mostly written. Then will come the long Autumnal evenings bringing the monster further to life by dressing it in lyricism. I can hardly wait!"

“As a band, Cradle Of Filth have already written about fifty percent of the material towards the new album, which now requires collating and readdressing. We started writing shortly after returning from our highly successful tour of the U.S. and Canada back in March.
“We were adrenalised by the whole reaction we received out there, having not been back to that part of the world for a fair few years. The camaraderie of playing to that many people across seven weeks really inspired us to start writing material again so soon after the release of our previous endeavour, 'Hammer Of The Witches'.”

“There are certainly a few songs completed already, though these will undoubtedly be scrutinised thoroughly when we hit the rehearsal studio. It'll just be awesome to play through it all creatively in the rehearsal room.”

“We can reveal that there is one song carried over from the previous album, a veritable lament entitled 'Achingly Beautiful'. We've worked some more on it, fleshing it out considerably. 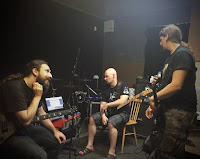 “It is very old school Cradle Of Filth, featuring a haunting middle section full of soaring female vocals and choir very akin to 'A Gothic Romance' from the album 'Dusk... and Her Embrace'. It may not even make this album's grade in the end, as we're being extremely thorough with quality control, but it's definitely something that is being delivered to the proverbial butcher's block from the off.”

Cradle Of Filth chose Brno as a location for several reasons aside from the draw of its elegance and rich architecture; drummer Marthus and second guitarist Ashok live there, plus Brno is also home to Europe's second largest Ossuary, which is essentially a medieval charnel house filled with fifty thousand skeletons, second only in size to the catacombs in Paris.


Cradle Of Filth have cast a commanding and macabre shadow across the metal scene for nearly a quarter of a century. Armed with their trademark, cross-pollinated assault, that taps into myriad strands of sonic extremity and morbid opulence, they have steadily conquered the entire world, unleashing a malevolent slew of classic albums along the way. From the raw and rambunctious savagery of their 1994 debut ‘The Principle Of Evil Made Flesh‘ to the wickedly monstrous, technicolour bombast of 2012's ‘The Manticore & Other Horrors‘, the Cradle ethos and aesthetic has had a huge impact on the evolution of metal, the band's insatiable appetite for performing live and frontman Dani Filth's unerring charisma and sense of occasion ensuring that they have established a powerful and enduring connection with Hell-bound acolytes everywhere.
Posted by Jonny at 7:04 pm

Email ThisBlogThis!Share to TwitterShare to FacebookShare to Pinterest
Labels: Cradle of Filth, Hammer of The Witches