BELFAST’S long-running Tennent’s Vital festival is now a long-established fixture in the touring schedules of many bands, falling on the days before the Reading and Leeds festivals.


But, 2016 was the biggest Vital yet, with the first day alone seeing almost 40,000 people pack into the City Council Boucher Road Playing Fields, most of whom were there for headliners Red Hot Chili Peppers and for their top support slot, Fall Out Boy.


The demographic of the audience paid tribute to the period when the Chili Peppers and Fall Out Boy dominated the TV music channels with hits and after hits and were on rotation on Radio One.

However, before the top slots appear there were three openers scheduled. Dublin band Otherkin provide a bit of fuzzed up pop sounds as the crowd dribbled into the large open air arena.

With most unfamiliar with the act, a few hundred were at the front with the rest wandering around the concessions and bars and securing a spot to relax before the real action got underway.


Cage The Elephant benefit from being more familiar to many in the audience and front man Matt Schultz does his best to raise the energy levels.


With four albums under their belt – the most recent just out late last year – the airplay they have received draws more people to the front, and to their feet as the dribble into the arena grew more akin to a flood.


Overall a well-balanced set, for many they fall into the inoffensive type of rock that suits well for this slot on the bill, Cage The Elephant would probably be more entertaining in an indoor venue.

But what they did do was begin to lift the mood of the crowd…which unfortunately dissipated quickly with Labrinth’s appearance.


With the unlikely distinction of being one of the few non-reality show acts to sign to Simon Cowell’s Syco record label, Labrinth has been something of a darling amongst the pop cognoscenti, cosseted by the in-crowd with carefully crafted sounds.


There is no doubt he, and his backing band are talented, but the sound is more vanilla than vital. Also, his continuous call out to “Belfast City!” became a little irritating after the third time.


Any energy that dissipated during Labrinth’s set was quickly restored as the crowd moved purposefully forward for Fall Out Boy.

The pop punk/emo pioneers have a sense of presence that belies their relatively static stagecraft. Pete Wentz, however, knows how to get everyone moving, with a plethora of tracks all too familiar to the hardened fans to the casual observer.


‘Sugar, We’re Going Down’ ‘Hum Halleluja’ and ‘This Ain’t A Scene’ were among the stand out tracks.


While Wentz is the cheerleader it Is Stump who provides the energy from the front, with trademark hat and easy banter.


The Chi-Town band may be derided by many, but there were few in Belfast who doubted they can deliver a super set. 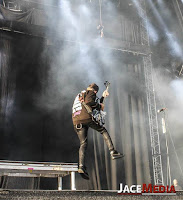 The Chili Peppers have also been derided by many – recently one US outlet described them as the ‘worst band in the world’ – the person who said that obviously did that well away from fans.


In the darkening skies, and accompanied by a stunning light show, Anthony Kiedis is at ease chatting with the audience, but most importantly sings with an easy confidence, with no need to cajole the crowd to join in.


While opener ‘Can’t Stop’ drew most to the front, second song ‘Dani California’ brought dances and singalongs throughout Boucher Road.


There is still a distinctive whiff of being ‘Californian’ about the Chilis that can turn some off, but it does translate well to open air festivals, to such an extent that it attracts metalheads, rockers, pop fans and occasional festival goers.


Flea is a focal point, not just a bass player, but a star in both his playing and his hyperactive antics. At one point he and guitar player, Josh Kinghoffer faced off at the front of the stage, trading licks and grimaces. 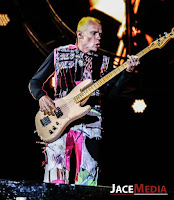 Chad Smith is one of the most under-rated drummers at present, as much of what he does is under-stated excellence – there’s no need for massive fills when subtlety works as well.


‘Otherside’ is a song that compels everyone to join in, and even tracks from latest release ‘The Getaway’ go down well, including the second single, ‘Go Robot’


The band have an abundance of songs to choose from, but ‘Californication’ is the song that seems to have all humming and singing to, the memorable animated video still lodged in many of those there heads.


As the crowd dissipated into the Belfast night it was clearly a triumph for the band as they prepared for their Reading and Leeds show as part of a lengthy tour that takes them across 15 countries.

But such was the reception, and the confidence of the promoters the Red Hot Chili Peppers have already agreed to a date in December in Dublin.