EP REVIEW: Cancerous Womb grow up on It Came To This

THE so-called scene is crammed across the UK with talented death/grind bands, all very talented and all more musically adept than the last. It is, therefore, very difficult to pick one from the herd, but Cancerous Womb have been heard by the metal sheep dog and been chosen.

Truth be told their 'It Came To This' ep sort of slipped by us last month, with a scant listen and promise to go back and have another assault on our lugholes. 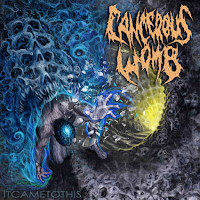 And, boy was it worth it. Five tracks (albeit one clocking in at less than a minute) that see the band step away from the clichéd lyrics and one dimensional music so akin to many, and behind the all-out attack some nice touches - even the occasional atonal solo.

After their début album 'Born of a Cancerous Womb' there was little to set them apart from the pack, apart from their energy in touring in all arts and parts, and a sneaking suspicion that the Scottish crew could do more.

With this ep they have shown that they have stretched themselves further. There is a lot more dynamic on all these songs. On opener 'The Shrieking of Idiots', as well as the usual frenetic riffing there are some nice guitar phrases that add a little touch of what is needed -  like a citrus aest sprinkled on top of what could have been a bland dessert.

By the same token closer 'When All Is Said And Done' has some riffing that is almost classic thrash in places.

It doesn't take much for a band to stretch their limbs and push boundaries. We're not suggesting that any act does a death metal 'LULU' - but taking one element of their sound and adding a little helps keep the listener interested.

Which is what Mike Robertson and co have done here. Also, gone are the lyrical tropes of murder, death, mayhem and horror. Instead, when you can pick away at Bernard's vocals, there is a more mature take on the world.

The only real criticism is the inclusion of the 54 second 'Formless'. Yes, it is a short, sharp punch to your balls, with an overt display of noise talent, but there could possibly be another 30-50 seconds of this track. Maybe that's for the live show.

Taken in its entirety this is an ep that shows how a band can develop that bit further in 48 months.