INTERVIEW: Allegaeon's new frontman Riley McShane speaks to Belfastmetalheads about stepping up to the plate on Proponets of Sentience

Riley McShane has taken over the vocal duties with Allegaeon, for their latest opus and like many here Steve Martin is a fan of these technical metal bruisers, so who better to send off to interrogate the new front man.


S – It’s fair to say that you hit the ground running with Allegaeon. What’s it been like stepping straight in to go on tour and be a part of the new album?


R – It’s been great, man! It’s been a lot of fun. They’re all such cool dudes. A couple of them I’d known just from being a part of the metal community before joining Allegaeon and so being able to partner up with them, make music, go on tour and all that stuff has been great. It’s been a really fun past year. Writing the new album has been challenging in the best way possible for me. Embarking on a concept album, the band’s first concept album with them also working on this kind of new style of song-writing to cater to that concept has been, like I said, challenging in the best way. It was lots of fun writing, lots of back and forthing over emails about ideas and lyrics and musical sections and all that kind of stuff has been great. I’m looking forward to what the future holds with these guys. 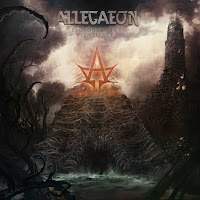 S – One thing that I noticed when I was taking time with the album to do the review is that there are a lot of different vocal elements that weren’t really present before. Some of the clean singing on the Subdivisions (Rush) cover or on Cognitive Computations, or some of the higher pitched screaming are things that weren’t so commonplace with the band before. How’s it been putting your own stamp on what’s already such an established sound?


R – It’s been cool! It’s been daunting to say the least. It’s always a little bit nerve-wracking stepping in and taking over a position especially as frontman of a band that, like you said, is already established and has their own sound and style. I was very much urged by the other members of the band to spread my wings a little bit with it and try to incorporate as many different styles that I could whilst still staying close to the sound that Allegaeon had already established. With that said, when writing through the album I just put what I thought fit best for the part, not so much worrying about it sounding exactly like old Allegaeon but still sounding similar enough that I could add a little bit more dynamic range while still keeping the fans happy.


S – We’ve already touched a bit on this but as you said, it’s a very highly conceptualised album with some themes that recur throughout. How did some of these come about and what was the thought process behind those?


R – When Greg (Burgess, guitar) approached me with the concept which the wheels had been turning on a little bit before I had joined the band, it was basically just the standard science fiction mythology of Terminator, Blade Runner and that idea of artificial intelligence gaining consciousness and wiping out the human race or at least starting a conflict between machines and man. That was just the broad strokes. That point is punctuated by the 3 “Proponent For Sentience” songs that create the sonata at the beginning and end of the album. So creating the connective tissue became my role lyrically and so I just ran with it and incorporated all the elements that I find interesting about it. The philosophical details that are kind of addressed in songs like “Of Mind And Matrix” and “Cognitive Computations” as well as the scientific elements of it that are addressed more in “Gray Matter Mechanics”, addressing things like neuroscience and just the functionality of the human brain and littering it a bit with social commentary like on “Demons Of An Intricate Design” but still contributing to the greater whole of the concept that if a new intelligence or a new consciousness were to come into play with what we’ve given them as a species and civilisation, especially at this juncture, just to find it natural to be like “Ah yeah, get rid of that!”


S – Following on from that a bit, what was it like writing lyrics within these concepts? Was that a different kind of challenge?


R – It was. Like I said, it was challenging in the best way possible because I feel like my strong interest and excitement for the concept material helped me to still be excited by the challenge and have a lot of fun with the challenge of writing to a concept as opposed to just writing whatever came to mind. It was definitely not something I’ve ever done before. I’ve performed on concept albums in the past but I’ve never actually written one myself. Being able to embark on that kind of challenge was not only new and exciting for me but also interesting for me, given the subject matter. I definitely had a lot of fun with it.


S – One of the things I definitely picked up on was that musically this is easily the band’s most adventurous album so far. Whenever the guys were putting together the actual music, what was that part of the writing process like? Was it very collaborative or was there one person taking the reins? How did that go?


R – Most of the songs are about a 50/50 split between Michael Stancel and Greg Burgess, the guitar players. They’ll come up with the song structure and everyone else adds their parts to it and we’ll change and accommodate based of “Oh! I really like that bass line, let’s dumb down the guitar section to make that a little more prominent” or “Oh that one drum fill is really cool. Let’s change the bass line to accentuate that” but most of the major sections of the song structure are written by Mike and Greg.


S – Talking a bit about touring, I saw there recently that you’re going to be heading out on the Max & Igor (Sepultura) tour! That’s already being called a landmark moment in metal history and a lot of people thought that was never going to happen. How did that come about and are you excited about that tour?


R – Yeah we’re super stoked man! It’s gonna be really cool to see those guys onstage together playing such an iconic album as Roots for X amount of weeks. We’re all really excited to meet and share the stage with them and travel around the country getting to know those guys, especially with them being such influential members of the metal community. It’s gonna be really cool.


S – I wish that was coming to Belfast, it’d really make my day! Can we expect to see you guys in the UK or Ireland on the next run of tours?


R – We’re hoping so! There’s nothing booked overseas just yet. It’s definitely on our chopping block and itinerary of things to do. It’s just all about time and place with touring and booking. We’re hoping that the album does well within its first week of sales because that’ll set in motion the wheels that’ll get us overseas.


S – And finally, have you anything to say to the readers over at Belfast Metalheads Reunited?


R –Yeah, never stop supporting metal! Never stop doing what you love. If you’re steadfast and work hard at it, always keep your nose to the ground you’ll get to exactly where you want to be. That’s what metal is all about. It’s about staying true to yourself, true to your music and always being passionate about it.
Read Steve's review of Allegaeon's latest release here.
Posted by Jonny at 8:45 am