RIGHT you feckers,  sit up and pay attention. No slouching at the back and no hiding yer sleeping eyes with yer long hair because this is important.

Here in Norn Iron we have some tremendous promoters bringing the rock and metal from far afield and close at hand, Derwin brings the hard rock to The Diamond Rock Club, Philip with SO:NI, Ciaran bringing eclectic bands, and Jonny at Shizznagh with even more eclectic acts.

If you want to keep up to date with what they are doing Mark Ashby has a Facebook Group (NI Rock and Metal Bands) in which he keeps us all up to date on what is happening. [And, it would be remiss of me to mention that he and his wife Carolyn celebrated their wedding anniversary by taking control of Uber Rock - good luck people!]

But, let not your attention wander...

One promoter who continuously takes risks to keep our wee metal hearts beating is Mr James Loveday. The Distortion Project keeps us occupied on Saturday evenings and is bringing acts such as Buckcherry, Meshuggah and Napalm Death and coming up fast, Raging Speedhorn.

But with all this risks means The Distortion Project is holding a second fundraiser to keep the metal tearing up our senses, ears,  necks and livers..

Put Saturday, 17th September in your diaries, write it down in blood. Be there at 4pm. Hand over £6 and buy some raffle tickets. Your reward? You'll help The Distortion Project bring more acts to our wee shores.

And, you'll have your teeth rattled.

For from 4pm until the heady hour of 9pm you can watch Neamhni, Fuckhammer, Shrouded and Bad Boat (and one more yet to be announced).

I see that has got your attention, you've pencilled it in blood in your diaries (those using their mobiles and tablets are excused from using blood on their tech, but carve it into a visible part of your anatomy) and you'll be there, Right?

And, because Mr Loveday is a nice guy you can recover from any hangover the next day by catching Raging Speedhorn at the Voodoo with our own hardcore heroes By Any Means and Dublin's Dead Label. See we told you he was a nice guy. Until then we'll this coming weekend you can catch The Crawling, Shrouded and Valpurga at Limelight2 in a DP show and bomb up to the Diamond Rock Club to see Chariot and Terminus afterwards...

You may find one of the Belfastmetalheads team wandering about, but DON'T forget 17th September.... 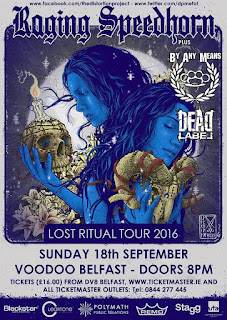