ALBUM REVIEW: Gotthard re-release not one, not two, but four albums on two CDs

Swiss Hard Rock outfit Gotthard have a long and illustrious career behind them. The band were founded in 1992 by guitarist Leo Leoni and singer Steve Lee, who was sadly killed in a motorbike accident in 2010.


They have released 11 studio albums (nine with Lee) and are about to issue their 12th album, their third with new singer Nic Maeder, ‘Silver’, on January 13th. 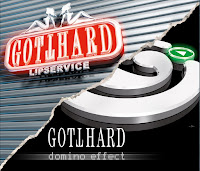 
The albums are part of their classic album series and will come in the way of two CDs in a package. One will include ‘Need to Believe’ (the last with Lee) and Firebirth (the first with Maeder) the second will be ‘Lip Service’ and ‘Domino Effect’, which are possibly their finest two, ‘Domino’ in particular a fan favourite due to its darker lyrics.
Both packages include bonus tracks, ‘Need to Believe’ has the tracks ‘Ain’t Enough’ and ‘Speed of Light’ both of which are fast-paced rockers with harder lyrics and great guitar work by Leoni, while ‘Firebirth’ includes a mostly acoustic version of album opener Starlight which is almost Bluegrass in style and an instrumental version of The Beatles (or more accurately George Harrison) song ‘While My Guitar Gently Weeps’. This is an excellent version of a song that’s been done to death and Leoni’s solo out does Clapton’s version by a mile with a more modern twist to it. 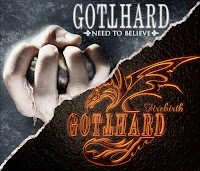 ‘Lip Service’ has no bonus tracks but ‘Domino Effect’ includes ‘Can’t Be The Real Thing’ and ‘ Superman’ (which was originally released on the Japanese version). Both songs are hard rocking tunes with catchy riffs in usual Gotthard style and the usual great vocals from Lee.


Releasing these specials only two weeks after their new album may well be a clever marketing ploy by Nuclear Blast but if you are a fan from way back then the only reason to buy them are for the bonus tracks which you probably have already.


However, if you are relatively new to the band then ‘Need to Believe and Firebirth gives you a good comparison between Lee and Maeder, who by the way does an excellent job of filling the huge shoes of Steve Lee, although maybe not quite on the ballads. The Lip Service / Domino Effect special is an absolute must buy if you are new to the band as it shows them at their very best.


Bottom line – most, if not all, Gotthard albums are worth having in your collection so whether you buy these specials will be a personal choice and will depend on what you already own but Nuclear Blast have picked 4 damn good albums for you to start with.