ALBUM REVIEW: Bloodbound go large on their War Of Dragons

THE new album from Bloodbound sees them go in combat in the ‘War Of Dragons’ a rock conflict that turns out to be an extremely strong album and with some powerful power metal.


The album starts of with ‘Battle in the Sky’, which is fast and powerful with some great vocals that really suit the song. This song is fast and hard-hitting and a great way to intro you to the album with it's superb symphonic nature.


Next up is 'Tears of a Dragonheart’, which takes it a bit slower but is one of the better tracks on the album. It’s nearly as if the song has no intention of stopping for anybody.


The album then steam rolls into the title track ‘War of Dragons’  - a much darker solo than the ones previously and a kickass rhythm, with some very good vocals. 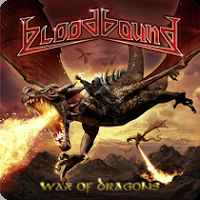 On ‘Silver Wings’ the album takes a shift and uses some great folk metal influences such as the use of a flute to expand their sound and add another great layer to the album which shows some great songwriting ability. This is one of, if not the best, songs on the album.


‘Stand and Fight’ is a good power metal anthem with some great segments put together to make a very good track. During the solo the tempo takes a quick shift and the song speeds up taking the song and adding another perspective to a song which is excellent.


‘King of Swords’ is like a tale of two stories, light and the dark. Going between the two makes the song very interesting, it takes a few listens but quickly it takes hold a very good song.


The album slows down with ‘Fallen Heroes’, which gives a good change to the album allowing a break from the previous much faster songs. Some very good vocals here.


The final song is ‘Dragons are Forever’ a great way to finish a great album. Gives the feel of winning a great battle - just what you need.


A great mix of some super vocals, talented guitar and bass playing and drumming! A very good listen and a very melodic album complete with good writing making it a great album to have for any metal fan. Definitely one to look out for!

Email ThisBlogThis!Share to TwitterShare to FacebookShare to Pinterest
Labels: Bloodbound, The War Of Dragons