IF you haven't heard it yet, Clutch will play a headline Belfast show at The Limelight 1 on Wednesday 14th June, 2017.

Formed in 1991, the Maryland-based band's ability to absorb different musical styles and fabricate them into a distinct Clutch sound continues to be their forté.

“A Quick Death In Texas,” overstocked with signature “Clutch heavy” Tim Sult riffs and lonesome guitar licks, and the funk undercurrent of “Your Love Is Incarceration,” colour 'Psychic Warfare' with articulate musicality and comfortable familiarity.

It's the parabolic motion of projectiles. Or, as Isaac Newton stated, what goes up must come down — that is, everything except Clutch. 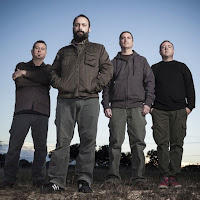 Earth Rocker created an insurmountable peak. But Psychic Warfare has altered laws of physics by elevating the smart songwriting and impressive performances of that last album, setting an even higher benchmark as their now-definitive album to date.

The eleventh Clutch studio album 'Psychic Warfare' goes straight for the throat with “X- Ray Visions” and never lets go. Working again with acclaimed producer Machine, this time in Texas, the concise arrangements that made Earth Rocker so assertive is the same harness for the combustible musical energy on Psychic Warfare. Harder, faster... let the rhythm hit 'em.

The overall intensity of Psychic Warfare would be self-consuming without the pressure valve of a canny rhythm section. Drummer Jean-Paul Gaster and bassist Dan Maines have an intuitive sense of dynamics that gives weight and contrast to the forcefulness of the vocals, steering Clutch into the straightaway out of tight, exhilarating corners.

“I listened closely to the rhythm of Neil’s vocals this time around.” Gaster explains. “The rhythms he sings, are very syncopated. It was my goal to articulate these rhythms on the drums while keeping the pulse of the music strong.”

Psychic Warfare is cinematic, a soundtrack to the plot of singer Neil Fallon's imagination. The narrative of “The Affidavit” sets the scene for an album of gunslingers, energy weapons, paranoid neurosis, and the occasional three-legged mule. It's an episodic lyrical landscape populated by abstract characterization, nuance, and clever peculiarity.

“I spent a lot of time doting over the lyrics,” Fallon says. “It was fun because I have a great luxury that I'm a professional  liar — that's what a storyteller is. Or at least that’s what I try to be. It's the one socially acceptable way to completely deceive people, and that's what they want. If you sing it with enough conviction, people won't question it. I just love that escapism, the fantasy aspect of it. And fantasy doesn’t necessarily equate to dragons and wizards. It can be seedy hotel rooms and sketchy hitchhikers.”

Gaster says the band knowing Earth Rocker was such a high water mark put them in a position of needing to follow up with an exceptional album. “Looking back on the process, one thing that sticks out in my mind is the amount of rehearsal the band put in. We started each pre-production day by writing out a new album sequence and then playing that sequence straight thru as if it were a set list. I think this allowed us to get inside the songs in a way we had not done before. When it came time to record drum tracks, I had a clear idea of how I wanted to play each song.”

In the past, Clutch consciously made each album conspicuously different from the last one. “We had a sadistic fear of repeating ourselves,” Fallon admits. “But over the last few years, we've realized our strengths and what it is that people like about us. Why deny it? Clutch is Clutch, embrace what you are.”