THE new album from Parasite Syndicate is a great way to debut themselves into the ever expanding metal scene. The album shows what they can do and they do it well.


A great mix of sheer brutality with some growls that shake the ground then some brilliant melodies with clean vocals that works extremely well with their style.


This is a great metal record.


The album starts off with the pounding of ‘Breath you in’ which succeeds in making you want to headbang. Followed up by some chilling vocals and a great melody then back into the heaviness. This is a great and powerful song to introduce you to the album.


Then onto ‘Red Sky’ which starts with a a guitar sending chills down your spine and breaks into something evil as if bubbling waiting to explode and it does, a very good track. The album carries onto ‘Ghost’ which is one of the faster songs on the album which also has some of the more complex writing on the album. 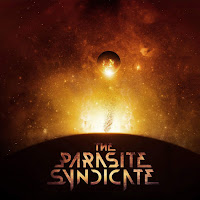 At first ‘Animus’ starts with an interesting techno beat which shows the ability to expand their sound into different areas to enhance the music but soon after the song breaks into the most melodic tracks on the album. This song has completely clean vocals that are perfect for a song like this. This song has something to say and it does it well.


The final track on the album starts with a fast paced intro then a break and right back into it. This is an extremely strong song to end the album on. The combination of technical guitar work, along with a powerful fast paced start, is carried on throughout the song. This is a great song although the slower parts seem to break the song apart. Nearly as if the song was separate at parts. Although this also gives the song a more measured structure feel to the song. The fast parts feel like an army of death charging and the slower parts feel as if impending doom is on its way.


Overall this has some very good songwriting here and extremely enjoyable to listen to it shows what these guys can do. There is next to nothing to fault here, great debut album for The Parasite Syndicate and we can't wait to hear what they have in store for us next.


Review by Zakk Traynor
Posted by Jonny at 10:31 am