PREPARE to have your fillings shaken loose, your insides churned and bone marrow turned to liquid because Crowbar are coming to Belfast.

The NOLA sludge legends will be appearing in Limelight on Wednesday, March 22nd in a promotion by The Distortion Project.

Kirk Windstein and crew are embarking on a European Tour that will see them take in UK and Irish dates.

Crowbar have been one of the most influential bands in their genre since they switched from previous names to release their seminal self-titled and second album in 1993. For those that remember that far back they even featured on Beavis and Butthead segments...

Despite their association with controversial Phil Anselmo in their early days the band established their reputation in their own right.

With Windstein re-united with original bassist Todd Strange this promises to be a show to produce earth tremors in the Ormeau Avenue are of Belfast. 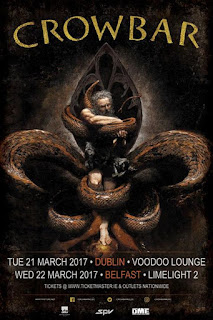