ALBUM REVIEW: Capturing Accept in all their metallic might on Restless and Live

LIVE albums, live DVDs and Blu-Rays - they are 10 a penny now that kit required and software is more affordable than ever. But now and again one of these live releases just makes you sit up and smile.

Accept are about to release 'Restless and Live' a DVD/Blu-Ray and double CD package that ticks all the appropriate boxes - a live 'feel', faithful renditions that aren't too faithful to the album versions, and a collection of tracks that would make on to a 'best of...' album.

The benchmarks for live albums was set decades ago with the (almost) 'Live and Dangerous' by Thin Lizzy, 'Live Evil' by Maiden and the ropey but enjoyable 'Live At Last' from Sabbath.

These among many others - not to mention live bootlegs' gave fans an aural refresher after seeing, or preparing to see, their icons on stage. Kiss, Zeppelin and many more produced live albums of varying quality, which means that any band in this era releasing live collections must reach further to please.

Accept may have changed personnel, may have had a period when it looked like they belonged to the distant past, but from 2009 they have emerged to stand tall with the European elite. 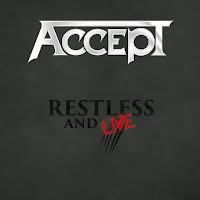 Of course this isn't the first time that the Teutonic masters have released a live album, with 'Staying a Life' from the 1985 tour was finally released in 1990. It was in the 80s that Accept emerged as a true force with 'Restless and Wild' and 'Balls to the Wall' and a tour with Dokken that saw the Germanic metal blowing the Yankee band off the stage night after night, including one memorable evening in Belfast's Ulster Hall.

Wind the clock forward - 'Blood of Nations', 'Stalingrad' and German chart topping 'Blind Rage' have cemented the Accept of the 21st Century icons that still blow away most of the opposition. But in 2010 they weren't sure of how it would all turn out...


“In 2010 everything had a big question mark next to it," said Wolf Hoffman. "What will happen, if…?

"Six years went by, three albums - with 'Blind Rage' being our first number one charting album! But we will never forget that we hadn’t played many concerts with Uwe Lulis and Christopher Williams before we walked onto the stage at Bang your Head!!! Festival.

"Everyone was nervous - it was the first gig for Christopher Williams in Germany and the first show for Uwe in Germany with Accept… he was aware of the presence of his fans and friends, and we knew that our fans were anxious to meet the new members!

"The beginning of the show was a thrill, but when we left the stage, it was clear: it had sparked!”

And, when you slot the CDs alone into your preferred method of listening there is a sparkle, a glint in your eye and more than a little part of you wanting to raise the horns.

This is a collection of 27 tracks - yes 27 - that capture the classics, re-invigorate them and bring the more recent songs to vibrant life.

'Stalingrad' becomes an even more epic re-telling of the WWII battle on the Volga, 'Teutonic Terror' is, if you'll excuse the pun, terrifyingly good, and 'Fast As A Shark' rips through the sound waves.

What impresses most of all is the pacing of the set. 'Dying Breed''s tribute to the legends of metal, 'No Shelter', 'Shadow Soldiers' and several other tracks clock in at over six minutes, and sit perfectly with the sharp, speedy songs like 'Starlight' and 'Son Of A Bitch'.

The only gripe - and a very minor one - is the almost 10 minutes rendition of 'Balls To The Wall'. If you're beer soaked and 'merry' at a fest the chant along is headily wonderful, but listening and watching at home may be a little too much.

The band's performances are all exemplary with Tornillo commanding the stage, while Hoffman, Baltes and Lulis forming up in traditional synchronised movements and musically in synch.

Yes, there are those that sometimes feel this headbanging in-time and guitars being wielded up and down in time with the riffing is a bit 'clichéd', but that sort of misses the point.

Listening to the CDs you are, of course, not aware of the choreography, and watching the DVD it does not detract from the sense of celebration of metal and Accept.

To be sure, this is not the visual extravaganza that the likes of Rush have committed to DVD, but 'Restless and Live' is a festival appearance. The Balingen experience of fans and band have captured the visceral energy of Accept and the link between adoring fans and a band that sometimes seems astounded at the reception and success.

'Restless and Live' is released on 13th January via Nuclear Blast. The band is currently touring with Sabaton in the UK, Ireland and beyond.

And, expect some new material...Hoffman said: We’re working on a new production right now and we’re looking forward to being on the road again! It is always possible to grow. We have arrived at a very good point right now: we know and trust each other and everyone has internalised and accepted their role. AcceptT is not only a trademark - it’s also our creation."
Posted by Jonny at 8:12 am