It was  a mosthtastric night when Black Peaks arrived in Belfast as part of a triple header in Belfast's Limelight on Saturday, January 28th.

An impressive under card of Making Monsters  and Employed to Serve certainly set the scene, collectively, all of the artists on the night delivered killer rifts, dark/grunge rock lyrics and head banging/ blistering vocal talent.

Making Monster's were the first to the stage and within minutes this Derry/Londonderry four piece had the crowd eating out of the palm of their hands.

Front woman Emma's voice can only be referred to as hHuge' and Emma demonstrated suitable sass/remarkable stage presence that merit the comparisons with Panamore's Hayley Williams.
This four piece has incredible genuine chemistry and showcased amazing original tracks from their debut EP 'Bad blood'.  'Bros', which Emma describes as a personal affirmation regarding female empowerment inspired by the women in her life.

They are quickly amassing an impressive online following/ critical acclaim from the likes of BBC radio 1's Phil Taggart and Kerrang's Alex Baker. These guys are one to watch, although I do believe they have more of a commercial sound that slightly went against he grain/ tone of the evening.

Next up was Employed To Serve definitely smashed it, rolling hits from their debut album "Greyer than You Remember", a cracking cover of Memphis Will Be Laid To Rest, as well as debuting tracks from their second album, which is currently in development with Holy Roar Records.

This six piece's sound has been described as post-hardcore” which best describes their angular, twisted take on familiar hardcore trope matched by grind influences. It' safe to see how this group have progressed from a simple two piece with the sole intention to see what happens, Employed To Serve have continued to tour extensively across the UK/ Europe in their own right and as supporting artists from their London base since their first EP release in 2015. 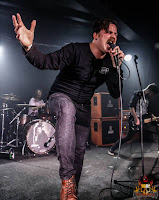 When headliners Black Peaks took to the stage, there was an immediate shift in the atmosphere, the energy and progressive rock sound whipped their fans into a head banging/moshing frency.
Blazing through a collection of rock tracks including Glass Built Castles, Set in Stone, Drones from their most recent Album Sautes.

Black Peaks provide an amazing masterclass in stage craft combined with outstanding musicianship that demonstrates their continued progression from their initial/self released EP Closer To the Sun under the then band title Shine to there previously mentioned crrent Sony Music Release Statues.

Their rise to the top of the Progressive Rock scene has been stratospheric, helped in part by the success of the track "Glass Built Castles" was added to the Guitar  Hero Live's GHTV service in February 2016 and on the evidence of tonight's show that rise will continue. 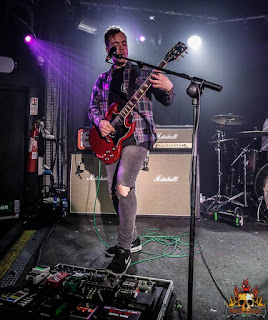 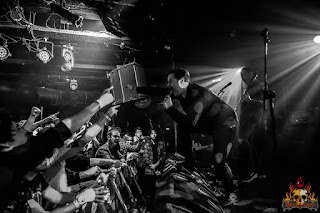 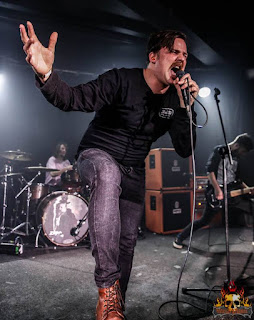