ALBUM REVIEW: Can clichéd lyrics carve a new path in 2017 for Grave Digger on Healed by Metal?

LET'S be honest, sometimes metal is its own worst enemy. The English-speaking world of rock and metal can be societally conscious, can challenge the norm, or can be completely and utterly ridiculous. If you doubt that go and listen to some Manowar.

The lyrical paucity of meaning of some bands is at times cringeworthy. But, for those who don denim and leather is it a barrier to enjoyment? There are some lyrics that you're work colleagues will giggle at, leaving the average metaller either defiant, or blushing.

However, sometimes you have just got to stick your middle finger firmly in the faces of those who have never had the molten joy of metal course through their veins.

With the gloom and despair across the world in 2016 it is refreshing to sit down and listen to the unapologetic Grave Digger's new release - 'Healed by Metal'. 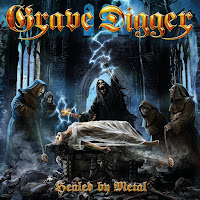 For a band that has been going for what seems like a millennium - well since the 1980s - this release sounds as musically fresh. They have seen trends come and go and weathered the vagaries of populist posturing.

While they emerged as part of the German power/speed metal that spawned the likes of Helloween they are now very much live within their own spirit of 'classic metal'.

Sure, at times there is a wee bit of a touch too much Priest, but that doesn't stop this 10-track album reach into the parts others can't quite match.

There are, of course, with any collection such as this points when it wanes, but that is not to deny the overall inherent strength. Chris Boltendahl vocals many to carry many of the weaker tunes, aided and abetted by Axel Ritt's guitar work, especially on 'Lawbreaker' and 'Call for War'.

But let's suspend our disbelief, quaff an ale or six and sing along with the title track 'Healed by Metal' and the '10 Commandments of Metal'. These are glorious unpretentious tracks, silly to the outside world, but for metalheads they make perfect sense.

What seems to be the main downfall of this album is the arrangements of the tracks. Weaker ones, such as 'Kill Ritual' and the slowed down closer 'Laughing With the Dead' could have sat better midway through, and the afore-mentioned closer '10 Commandments of Metal' would have made a better closer.

Grave Digger have aged well (this is their 18th album) and taken as a whole this is a strong refreshing opening for 2017. Songs like 'Forever Free' and Lawbreaker' - as well as the title track - bring a smile to the jaded face, push pretentiousness and posing to the places they deserve to be put and played at the right volume you can share this with all your neighbours.

Healed by Metal is out on Napalm Records on 13th January

Health warning - some of the tracks on this album are extremely catchy - you may find yourself humming along at unexpected times, causing friends and family to doubt your sanity. The only cure is to allow them too to be Healed by Metal...
Posted by Jonny at 3:51 pm