A quick look on Wikipedia defines objectivity as the following: "Generally, objectivity means the state or quality of being true even outside of a subject's individual biases, interpretations, feelings, and imaginings."

This is something I've struggled to approach Sepultura with since I heard that absolutely horrific cover of 'Bullet The Blue Sky' when to this day, I vividly remember my wide eyed excitement at seeing the Seps with some new music on the TV turn into abject disappointment.

With this pushed as far to the back of my mind as possible, I marched onward into 'Machine Messiah'.

First things first, the production is excellent. It may be a bit too crystal clear for the purists out there but this album wasn't made for them anyway. 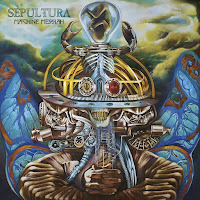 The album's namesake and opener begins with an almost Pantera sounding clean guitar before it kicks in to a low paced, melodic guitar driven crawl. Derrick Green slides in with an almost understated, chant-like clean vocal that caught me completely off guard, however on repeated listens really works. His yell is his strong point though, particularly in the higher registers.

Moving on, 'I Am The Enemy' picks up the pace from the get go. One thing I couldn't help but notice is when the drums shift into blast territory that either they're poorly written or sloppy. There's something offbeat about them but I'm not sure it works. Iggor Cavalera one mister Eloy Casagrande is not.

That aside, it's not a bad song and the poor shift on percussion is more than made up for by the efforts of  Andreas Kisser who arguably plays better than he ever has over the whole album.

As we hit 'Phantom Self', this is where the wheels start to fall off. There is some added instrumentation that really lets it down. Unfortunately this becomes a bit of a recurring theme.
'Alethea' also suffers from some piss poor drum sections and really is a thoroughly uninspired track from start to finish. Leave it in the practice room lads.

'Iceberg Dances' starts off in familiar territory before proceeding to rip off Mastodon for the remainder. It's not bad but it's just not Sepultura and whoever is playing that organ in the background can fuck off into the night.

'Sworn Oath' has a satisfyingly creepy crawl before a solid slab of double kicks lead into arguably the most satisfying groove on the whole record. I'll even let that daft orchestration slide (SEE WHAT I MEAN).

At this stage it's almost as if the band remember who they are and start sounding like Sepultura again. Hooray! It might be too little too late though. Seven songs in is a bit too far to be remembering who you are.

'Resistant Parasites' isn't a bad effort and 'Silent Violence' takes no prisoners while 'Vandals Nest' is full bore from the get go. Wahey! The lads are back again!

Except they're not... 'Cyber God' opens with a dull crawl and fails to excite throughout and 'Chosen Skin' starts off with promise but very quickly becomes a Fear Factory clone. As Roy Walker would say, it's good but it's not quite right.  'Ultraseven No Uta' sounds like they're taking the piss and would be a laugh to have a jolly aul pit to, but again seems a bit...off.

I really do have mixed feelings about 'Machine Messiah' (as I'm sure does Paolo Jr. after getting a dose of the ...And Justice For All treatment).

At times it's terrible and at times it's incredibly enjoyable, but overall it seems to be lacking a bit of inspiration. Throwing enough shit at the wall to see if it sticks really isn't good enough at this stage of the game and the presence of Iggor is sorely missed throughout, but when it shines it really does shine, specifically toward the latter half of the album.

Give it a go. You'll not burn all your Sepultura records after hearing it, but it's not going to change your life either.