NEWS: Chrome Molly getting set for release of Hoodoo Voodoo on EarMusic

REMEMBER back in November, when Graham Bonnet played Belfast? If you do, and you were on of the types that actually make it in for the support bands you will recall that Chrome Molly opened the evening's festivities.

As promised on that evening the new album, Hoodoo Voodoo, is set to be released on January 27th, via EarMusic.

Chrome Molly made a bid for stardom in the mid to late 1980’s, opening for Alice Cooper and Ozzy Osbourne amongst many others, playing the legendary Marquee Club over 20 times and headlining the CBGB in New York. 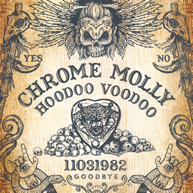 How do you take a band that has been performing and recording since 1983 forward? By going back to what you love – riff laden melodic metal with tons of delicious guitar solos that make you want to grab your air guitar and join in.

That is what Chrome Molly have achieved with this, their sixth studio album 'Hoodoo Voodoo'.

Hoodoo Voodoo draws on the bands core influences. Formed during the latter half of the New Wave Of British Heavy Metal scene, the Mollies were always inspired by the great metal bands and this album is something of a tribute to those acts – you might hear Priest, UFO, early Leppard, Saxon, Rainbow and myriad others echoing through the album.

While not strictly a concept album, the original idea was to create an album that conjured up the magic of listening to the great bands of the ‘80’s, with the riffs and tunes that shaped the band.

Inspired by a friend who asked why bands don’t go in and make albums like they did in the old days, backing tracks were played live and much sweat was poured.

Steve Hawkins (vocals) said: “We wanted to make an album that made us feel like we did in the ‘80’s, one that you can turn up in the car and sing along and play air drums and guitar to.”

Tracklisting:
1. In The Beginning
2. Can't Be Afraid Of The Dark
3. Some Kind Of Voodoo
4. Pillars Of Creation (Albion)
5. Now That Those Days Have Gone
6. Indestructible
7. Save Me
8. Rock For You
9. Feeling Pressurised
10. Dial 'F' For Freakshow
Posted by Jonny at 7:37 pm

Think you need to really listen to this album production is poor and vocals are even worse guy cant sing in tune.we all love the halcyon days of the nwobhm but doest come close amazed this got past the record company and toby jepson