Swiss hard rock outfit Gotthard are set to release their 12th studio album today, Friday January 13th and for fans of the band and hard rock it is highly recommended!


Formed in Lugano, Switzerland 25 years ago by singer Steve Lee and guitarist Leo Leoni the new album has been aptly named ‘Silver’.
It’s the third album with singer Nic Maeder at the helm and he has now firmly established himself in that role. Musically it has the harder rock sound as in ‘Bang!’ rather than some of their softer rock earlier albums but has more of a feel of seminal albums ‘Lip Service’ and ‘Domino Effect’. 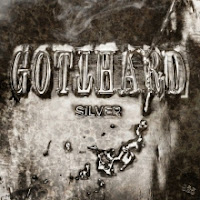 Well known for their ballads Gotthard have actually released an album without one on it....sort of, but if you are expecting another ‘One Life, One Soul’ or ‘Heaven’” you won’t find it on ‘Silver’. A couple of songs almost fit the bill but what you actually get on this album is a masterpiece in straight forward hard rock with that distinctive catchy Gotthard sound, anthemic choruses with big hooks, excellent riffs and solos and a super tight rhythm section


Starting with ‘Silver River’ with a keyboard and harmony vocals intro it develops into a classic hard rock riff with a real groove to it. The solo is a sign of good things to come later.


‘Electrified’ continues with the up tempo groove attack and features a nice bass line from Marc. There’s a great hook on this fast paced song that briefly lets up before the solo which continues on for a time under the vocal.


Track 3, “Stay With Me’ is the first released single. With an acoustic start that hints at a ballad it soon builds into a melodic song with a nice mixture of soft and hard rock tempos. The vocal harmonies are spot on and it’s another song with a big hook questioning whether you should change who you are just to stay with someone, just to please them.


The catchy ‘Beautiful’ has a radio friendly mid tempo beat with great harmony vocals and just enough of a hard edge to it. It’s a song about escaping from the world with someone to make a better life together with the weight of the world lifted from your shoulders. The tempo and beat nicely conveys this feeling.


‘Everything Inside’ is a song of hope and freeing your mind without keeping things bottled up. It has a haunting opening but has a good solid rock riff to it that gives the song an upbeat feel to it. It also has a pretty good solo that fits the song nicely.


As for track 6, ‘Reason For This’ has a Heart style riff to start but develops into a mid tempo, straight forward rocker with a tight rhythm section and nice vocals from Nic. It’s a song about blame and has good harmony vocals to match.

‘Not Fooling Anyone’ has an acoustic start and screams Gotthard ballad. But, it’s not exactly that as it has an almost personal emotional depth to it that defies the normal love style ballad as it’s about having a cold heart which makes it acoustic angst and not quite the typical smushy ballad.


‘Miss Me’ is up next. With a slow groove to it it doesn’t quite build into the song it could’ve been as the lyrics have a lot of hurt and pain that a slightly harder edge from the middle section might’ve sold the songs meaning and feeling better. Doesn’t make it a bad song, in fact it’s good but just feels like something is missing…


Track 9 is the interestingly titled ‘Tequila Symphony No.5. We are now back to the hard rocking mode again (with a nice classical music touch) with a great riff and rhythm section. It’s another song about dealing with the darker side of the mind, finding yourself and needing someone to believe in you to do so. Possibly the best track on the album both lyrically and musically.


‘Why”’is another acoustic track mixed with a rock beat and has the now traditional Gotthard background vocals.


Track 11 “Only Love is Real” has a piano, vocal and orchestral intro that develops into quite a dramatic song both lyrically and musically. It has a great arrangement to it and the songs title basically gives the lyrical content away.


Penultimate song ‘My Oh My’ is right out of the ‘Domino Effect’ era with a heavy riff and probably Nic’s best vocal delivery. With some excellent guitar work it’s another song with a positive message. It competes with ‘Tequilla Sympony No 5 as possibly the best song on the album depending on your personal taste.


Final track “Blame on Me” is a fast paced rocker to finish the album off. With a bit of harmonica thrown in for good measure, it’s full of energy with a bit of a manic solo to it. A song many can relate to about going out for a pint (or in this case JD) which doesn’t quite end up like that!


Lyrically the album feels like an exercise in the duality of life and trying to keep the balance between good and bad. A crisp, clear production only enhances the musicianship of this band and the variety of songs they are capable of producing. With little bits of piano, harmonica and the good old Hammond organ thrown in for good measure this is an album that is highly recommended!