NEWS: WASP set for return to Belfast bringing the chainsaw power of The Crimson Idol

BLACKIE Lawless is bringing his WASP wrecking crew back to Belfast on October 18th for a Limelight1 date that will see the band play the seminal album 'The Crimson Idol' in full, plus hits and smashes from across the band's career.

The US act have been faithful visitors to Belfast since the two shows in then Ulster Hall in the 1980s, making regular return visits, most recently on the Golgotha tour cycle.

Released 25 years ago, the concept album 'The Crimson Idol' is the tale of excess with the tragic star struck doom of Jonathan Aaron Steel at its core, no doubt a metaphor for many in the LA scene from which WASP was birthed, with autobiographical asides from Mr Lawless' own career.

The cast of characters on the album have some deliciously Machiavellian characters, none less than 'Chainsaw' Charlie and Axel Rodman.

WASP always put a lot of effort into their stage shows, so expect the full 'Crimson' treatment come October. 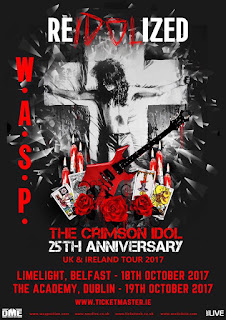