The guitars, bass and drums are already done – and right now Gerre is lending his voice to the soundtrack of their 35th anniversary!


Vocalist Gerre said: "At the moment I have 7 songs ready! It's a great pleasure to work with Martin for the very first time! He really kicks my ass, so I have a lot of work to do! I really look forward to having a great result to celebrate our 35th birthday with, in a reasonable way! Senile with style!"


The band has unveiled more details on their new album: the record is planned for a 2017 spring/summer release via Nuclear Blast and will be called ‘One Foot In The Grave’.


The cover artwork will once again be created by Patrick Strogulski, who's a student of Sebastian Krüger, the recent artwork designer of Tankard. More info coming soon... stay tuned!

You can order your copy here.

The story of Tankard is an exceptional one: the thrash metal force from Frankfurt, Germany has been around since the early 80's, spearheading a wave of German thrash bands who became successful worldwide (Kreator,Destruction, Sodom...).

And while a lot of other bands struggled, split up or came back for reunions, Tankard never had these problems. They have always been there. And they've kept their worldwide fan base for all of these years, delivering strong album after strong album. When you think of beer and thrash metal, the name Tankard is the resounding response. 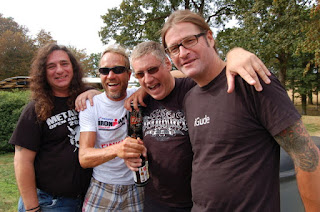 Email ThisBlogThis!Share to TwitterShare to FacebookShare to Pinterest
Labels: One Foot In the Grave, Rest In Beer, RIB, Tankard