AFTER much consideration we have decided it is Scott Ian's fault. Yep, the jury has delivered it's verdict and Mr Ian has been indicted along with co-conspirators Dan Lilker, Charlie Benante and Billy Milano.

The charges for which they have been found guilty is writing unfeasibly short songs, such as 'Diamonds and Rust (Extended Version) clocking in at two seconds, and the 'longest' song on 'Stormtroopers of Death' clocking in at an epic...two minutes and 32 seconds (it was 'Freddy Kreuger')

With this ethos firmly embedded and taken forth by early Carcass and Napalm Death we arrive at a place where extremities can be measured at times by the brevity of the tunes. 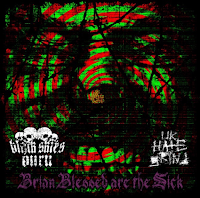 Thus in 2017 we sit to ponder the new split from Black Skies Burn and UK Hate Grind...and there are 20 tracks packed in, the longest being an almost prog length of two minutes and 22 seconds.

Yes, 'Brian Blessed Are The Sick' showcases two talented acts who firmly believe in the short, sharp shock effect and they are both, very, very good at it, if at first the album flies by.

For those who scan the gig listings, you'll have noticed that Black Skies Burn will support Napalm Death in Belfast on March 19th, along with Warpath and War Iron - should be a quiet night...

The four-piece hails from Oxfordshire, England and from opener 'Death By Association' Simon Manion's vocals rip through your aural tract amidst the wall of extremity produced by Chris Mark's guitar, Will Michlyk's roaring bass and Steve Butler's manic drumming.

Humour and social commentary sit side by side on this mix of death and grind, with the likes of 'Censorshit' and '10% of Fuck All'' showcasing the band's intensity. Sure, you can hear echoes of Dying Fetus, Wormrot and Brutal Truth, but Black Skies Burn have carved their own path on this Grindscene release.

And, make no mistake this is not a one-dimensional release, there is sufficient variety to entertain through their mixing of pace and hints of melodic runs.

The other act on the split UK Hate Grind also lay down the fast and furious tracks, as the Bristolian two-piece also batters their way through dark, dystopian and violent thematics. Their use of samples is perhaps more prevalent, but it adds to the atmospherics.

Occasionally clean guitar appears amidst the crust and grind onslaught.

True  - you can't help but giggle at some of the song titles: 'The Bloated Mass of Satan', 'Fisted By The Hand That Feeds' 'Creature Cumfarts' and 'Gastric Throat Gag' are on the surface nice plays on words, but throw that all together and there is real sense of metaphorical pokes at a society dominated by the creed of hyper-normalisation (watch the Adam Curtis documentary with the title).

The work rate of the band (and BSB) is clear throughout and it is the timing of the tracks as they appear that gives it a feeling of purpose throughout, rather than a headlong dash to the end.

With 20 tracks to feast upon - no matter their length - this is a smorgasbord of death, grind, crust and extremity. For a laugh play it to your mate's Bon Jovi loving wife.

Brian Blessed Are The Sick is available to pre-order here, at a very reasonable price point!
Posted by Jonny at 7:12 pm