THE third album for newish acts is when the heady air of being in a new band has faded and its time to see whether you've gotten over the 'difficult' second album. But what about if you are an experienced group of musos, with a lengthy track record. What does LP #3 mean then?

With a festival tour under the banner of Thin Lizzy last year album number three couldn't have come soon enough for Black Star Riders as an entity in its own right, and 'Heavy Fire' is the release them from the shadows of Lizzy, The Almighty et al.

There is still a vague hint of Lizzy's legacy in places here, but this - as great as 'All Hell Breaks Loose' and 'The Killer Instinct were - is when any tags, any wondering at the band's longevity can be cast aside and Black Star Riders mount their steeds and the hoof beats thunder.

In songwriting terms this a complete set of 10-songs that are true and walk through your speakers with a confidence, and a sure swagger that establishes itself from the off with the title track 'Heavy Fire', which with its slowed down mid-section takes a listen or two before it clicks. 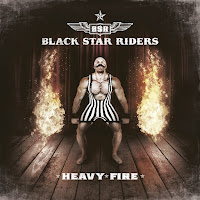 'When The Night Comes In' is perhaps the track with the most similarity to Lizzy, but the rest of the album is BSR through and through. Any shackles that may have held them back in other people's perception are thorn off and this is a band that kicks you firmly in the aural tract.

Scott Gorham adds the licks and Damon Johnson and Ricky Warwick serious amount of riffage. One senses that after Warwick and Johnson toured with a couple of acoustics and Warwick played on hi Fighting Hearts tour there were a collection of songs to bring to the collective BSR stable for completion. Something Warwick seems to confirm in the blurb accompanying the album.


“I had the album title almost a year before we started recording,” he aid, “and it refers to the fact that there’s so much going on in the world right now, and we’re bombarded constantly with information and technology designed to make our lives better and easier, but yet we don’t really have a clue where we’re going as a species. It’s kinda asking about how we deal with all that, how we negotiate our own paths in these sometimes dark and dangerous times.”

However they arrived at the songs they surge from your speakers. There are huge choruses, interesting arrangements and a wee surprise in the shape of the wonderfully balanced, laid back 'Cold War Love'.

Warwick's gift of the gab in weaving tales is on display, whether they are deceptive tracks about romance and lust ('Dancing With The Wrong Girl'), disgust at the lack of gun control in the USA ('Who Rides The Tiger') or warning relatives about their path ('Ticket To Rise) the storytelling matches each musical arrangement.

What makes this the band's strongest outing is the breathing space within each track. When  producer Nick Raskulinecz sat the band down in the studio in Franklin, Tennessee his ear and the band's collective experiene melded, with Robbie Crane and Jimmy DeGrasso making sure that the rhythm section doesn't allow itself to run away no matter how fasrt-paced the tracks.

When the album closes with the up-tempo 'Letting Go Of Me' such is the strength of the 10-tracks that clicking 'repeat' comes naturally.

Black Star Riders have produced a superb album, but as Johnson says it will be the fans who will decide if it matches their previous outings.#

“I think it’s the most solid piece of work that we’ve done,” he said. “Do we have songs on this album better than 'Blindsided', better than 'The Killer Instinct', better than 'Finest Hour'? I think so, but beyond that I think that our audience is going to recognise this as a complete work from top to bottom. We’ve grown as songwriters, we’ve grown as musicians, and I think you can hear that in the record we’ve made.”

That growth is apparent, mature measured and ready to take on the rock world. And, with an increasing collection of Black Star Rider's songs perhaps live there won't be such a reliance on Thin Lizzy tracks...

Heavy Fire is out Nuclear Blast on February 7th