And, if you were lucky enough to see Roth's show at the Diamond Rock Club in 2015 (review here) you'll know how special he is in the live environment. 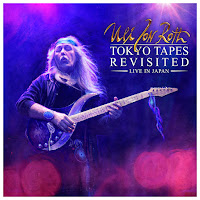 The performance is a celebration of Roth’s classic work with The Scorpions, and was recorded on February 20th 2015 at the same venue as the band’s classic 1978 live album Tokyo Tapes. Roth was a founding member of The Scorpions in 1973 before leaving to pursue a solo career in 1978 with his own Electric Sun.

As the recognized creative heartbeat of The Scorpions, Roth achieved worldwide fame for his unique guitar and song-writing talents, in turn causing him to influence a plethora of modern guitar giants such as Kirk Hammett of Metallica, Billy Corgan of The Smashing Pumpkins and Steve Vai.

Tokyo Tapes Revisited - Live In Japan will be released in four different formats.

Product 2 - DVD Digipak:
The same as Product 1 only in a DVD digipak.

Product 4 - Super-Deluxe Boxset, limited to 800 copies:
It will be a proper, lid-off shell box containing 4 heavyweight vinyl LPs of Roth’s 2015 Scorpions Revisited release which has never been released on vinyl. There will also be an 80-page, gatefold, hardcover 12” book which will house 8 discs - 1 BluRay concert main-feature, 1 bonus BluRay disc (which will contain the original footage from the first Japanese Scorpions Tour 1978, shot personally by Uli on his Super 8 Camera), 2 audio CDs of the main Tokyo concert and 4 bonus audio CDs of Roth’s Osaka and Nagoya dates on the same Japanese tour. The set will also include an Uli Jon Roth replica guitar key-ring, and a signed certificate of authenticity, numbered and signed by Uli himself.
Posted by Jonny at 10:00 am