SOMETIMES you just got to admire a band that just says "sod it, we're doing what we want to and to hell with the rest of you". Such a single-minded attitude has led to many a band actually achieving the elusive thing: success.

Since their last release in 2013 Cross Eyed Mary have ploughed a sometimes lonely furrow. And, at times they have had live appearances when their three guitar approach has been muddied by the mix on stage.

But in November, 2016 it seems that they all the pieces have slotted into place with the release of their new EP 'Nil By Mouth'. This is a four-track smack in the mouth, with a super low end and melodies that crawl inside your brain like the worst mind worm. 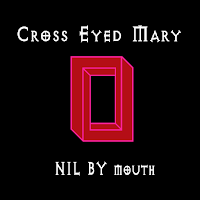 From arrangements through to the performances themselves Cross Eyed Mary have nailed it. And, the EP is to be officially launched when they appear at this coming weekend's Hard Rock Hell X in North Wales.

The recently released single 'Tates Avenue' is the undoubted stand-out amidst the 20-minutes of rock...a down-tuned stomp as the three guitars of Kevin, Sarah and Jason punish the listener in the proper manner. It rolls along like an articulated trailer out-of-control and heading to inexorable death and destruction in its path.

The production by Michael Mormecha helps the overall sound stay coherent. At times the snare might have a little more bite, but that is compensated for by the well balanced cymbal work, clearly separated in the mix.

With the triple axe attack it would be easy to overlook the contribution by Brian (bass) and Daryl (drums) to the overall Cross Eyed Mary sound, but on the EP closer 'Nevada' it is their work that propels the track.

Make no mistake, however, while this is an enjoyable four-tracker it is not coming from a happy place. Lyrically it showcases a dystopian society, messed up and heading to oblivion. Melodies are the counterpoint to depression, such as the opening guitar line and harmony on opener 'Rhapsody'.

For all the depressive overview there is also hope - the hope of a fist shaking and a roar against what some might as the inevitable: but rock music has never accepted the inevitable so long as you can plug into an amp and play...

Overall Cross Eyed Mary have managed to pull off a compact, confident EP release on 'Nil By Mouth', an EP that will stand the test of time.

Nil By Mouth is being launched on November 11th at Hard Rock Hell X, Wales
Posted by Jonny at 8:05 pm