AHEAD of the re-release of their début album 'Ember To Inferno', Trivium have unearthed a rare demo for fans to get their hands on early.

For pre-orders of 'Ember To Inferno' (set for release on December 2 via Cooking Vinyl), fans will now receive 'The Storm' as an instant grat track.

'The Storm' is a Trivium track of legend. It's been completely absent from the world for ages since it was only very briefly available on 'Caeruleus' (Trivium's "Blue Demo") which pre-dates any of the band's albums and harks back to their earliest days. 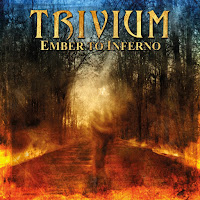 Frontman & guitarist Matt Heafy was just 16 years old when this was recorded. This demo has been rumoured to be priced at hundreds of dollars on auction websites. The song lyrically is inspired by the Norwegian Oskoreia; a European folk legend that is understood to have inspired black metal's very creation.

'The Storm' foreshadows the direction that Trivium would eventually take with their more progressive pieces (as seen on the 'Shogun' album) - it is a blend of instrumental technicality, melody, and brutality. Hear it now at: http://www.trivium.org/abinitio.

'Ember To Inferno' will be released in four configurations, with the deluxe editions containing the band's earliest recordings: "Ruber" (the "Red Demo"), "Caeruleus" (the "Blue Demo") and "Flavus" (the "Yellow Demo"). Fans can pre-order all formats online via https://triv.lnk.to/ETI

The band have also announced the 2017 tour support will come from respected Brit prog metal group SikTh (www.sikth.band) and fast-rising newcomers Shvpes (www.shvpes.com).  Tickets are on sale now for the Belfast show on 12th February, 2017. 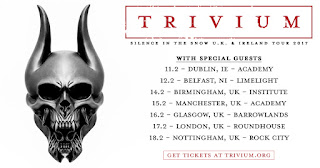