ALBUM REVIEW: Hammerfall prove they are 'Built To Last' on album number 10

WHEN bands record an album do they deliberately put in a section in a song "whoa, oh , oh, oh" anticipating a future singalong? Purely a rhetorical question of course, but it does seem a trait of Euro and power metal acts.

That obligatory chant appears on the new Hammerfall album, 'Built To Last' along with all the usual songs referencing swords and hammers held high, princesses, dragons and heavy metal.

And, there now follows a chorus of people questioning the "daft" lyrics of many a power metal band...Before they cast disapproving looks down their noses, we all should pause a moment. 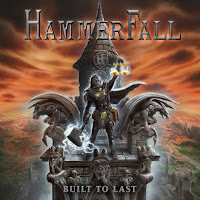 Would you rather they write songs with lyrics by some floppy-haired, shoe gazing middle class prat who think that they didn't get enough sweeties when they were a child? Or lyrics from some auto-tuned talentless act that barely conceal that they are singing about sex?

Heavy metal has so many flavours and varieties that you have a veritable cornucopia to choose from, and power metal, for all its overt 'silliness' has its place, and Hammerfall with nine albums already under their belts have earned their place in the metal pantheon.

On this album 'Built To Last' they have not only consolidated that place, but have in many parts exceeded many of their previous releases.

Sure, we have madly speedy songs such as the insanely fast 'Dethrone and Decry' (which has a lovely set of well times solos and that chant) as one would expect, but there also more balanced tracks such as the title track and 'Second To None'. Overall, there is enough variety in the 10 tracks, and the only gripe is there is room for another couple of songs to extend the experience.

Joachim's vocals are always clear and distinct throughout, reaching some seemingly impossible registers, while Oscar and Pontus intertwine and weave so many delicate shapes in the songs, such as some heart breaking work on 'Twilight Princess'.

What this album is, therefore, is a no compromise approach, no apologies for what Hammerfall are, or what they represent. At one turn you could sit back and let it all wash over you, at the other turn you have a beer in hand and singalong pulling all the right shapes.

And, there is the obligatory song about Heavy Metal. But, 'New Breed', which, on the surface seems a little trite, but within the references to swords et cetera there is clear allegory here about the community of metal. "New breed, old breed, we are all the same breed, heavy metal running through our veins," go the lyrics.

And therein lies the key. The shoe gazers, the mainstream, the twerkers, the commercial radio stations, the sniffy press and all the rest will never get it. We may disagree within which bands we like, and which genres of metal we prefer, but Hammerfall nail the colours to the mast, we are the community that the 'others' never understand.

Whether you like power metal or not, give this a blast, throw the horns and transport yourself to a world where we can all be saviours, quaff mead and regale each other with tales of our mighty exploits (or alcohol intake).

Hammerfall, thank you for reminding us all of how much our lives need metal.

Review by Jonathan Traynor
Posted by Jonny at 6:57 pm