ALBUM REVIEW: Diabulus In Musica take us down to Atlantean depths on Dirge for The Archons

SPANISH symphonic metal crew, Diabulus In Musica, have been going for just over 10 years and are about to release their latest full length on Napalm Records.

As soon as the term 'symphonic metal' is bandied about your mental checklist kicks into gear: crunchy guitars, sweet vocals, orchestral movements, keyboard sweeps, extravagant solos and choral elements, plus an obligatory one or two 'haunting' slower tracks. All are present and correct here.


Then, of course, the 'concept'. This release 'Dirge for the Archons' takes us to the mystical kingdom of Atlantis, where the Archons are the ruling magistrates of the land that according to myth was sunk beneath unforgiving waves.

Historically the myth may be more connected to the devastating earthquake that destroyed Thebes and its culture, but that never should stop a good tale. 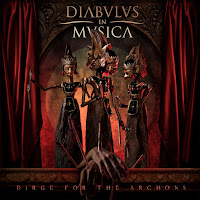 What Diabulus In Musica have done on this album is to (at times) lyrically tie the mythos together. However, musically the binds are not as tight.

Sure, all the performances are top notch, but not all the songs are. While 'Ring Around The Dark Fairies Carousel' has a nice variation on the trope, too many sound a little formulaic, posing the question whether it will enable the band to reach out beyond the fans of symphonic metal (all of whom will lap this up).

To sum it up there is a 50/50 chance of it gaining more fans for the band. At times all too predictable, and at times sounding like real thought has gone into the arrangements.

It is as if in parts the concept has overtaken the tracks. 'A Speck In The Universe' sounds like Clannad trying to do a rock soundtrack for Atlantis and while Zuberoa delivers a stunning vocal performance it doesn't ever really 'go' anywhere.

In comparison 'Hiding From You' has real punch in how the song works itself out; this time developing throughout, with light and shade within its structure.

One of the really solid tracks 'The Voice Of Your Dreams' has delicacy and power in equal measures and a real tasty piece of solo work too.

Overall this is a solid release. Zuberoa, Gorka, Odel, David, and Alexy pull together well and manage to push out an album that will have fans of the band and the wider 'symphonic' metal family salivating.

Would others return to this after one listen? If pushed they will find good tracks than weak ones, and that may be enough for them to delve into the band further.

Email ThisBlogThis!Share to TwitterShare to FacebookShare to Pinterest
Labels: Diabulus In Musica, Napalm Records, The Dirge For The Archons