Today, the band have released the second alternative track by track trailer in which they respond to questions based on the final five tracks from the forthcoming album. Watch it below. 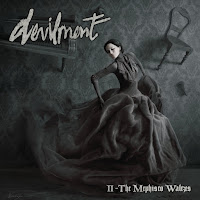 The second Devilment record makes no splintered bones about its nefarious intent, offering a bewildering torrent of disparate and demented ideas and delivering them with refined, ultra-gothic panache and several jolting doses of Dani’s trademark verbal subterfuge.

DEVILMENT recently announced an extensive UK tour which will commence this December and have no NI dates scheduled...