On December 16th UDR Music & Motörhead Music will release 'Wake The Dead', a special edition box-set containing  The Wörld Is Yours, Aftershock and Bad Magic.

These hugely successful symbols of the mighty force that Motörhead was, until founder, frontman and legend Ian ‘Lemmy’ Kilmister sadly passed away in December 2015, will be presented in a special clam-shell box, with the cover highlighting Lemmy’s famous doodles from those album eras. 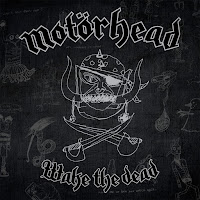 Lemmy would often sketch for fun, and he would also thumbnail sketch ideas for t-shirts and artwork whenever necessary; the main cover image highlights one of those rough-draft thumbnail sketches described.

The box will also include a classic photograph of Kilmister/Phil Campbell/Mikkey Dee shot by renowned photographer Pep Bonet.

Produced once again by Cameron Webb, and recorded/mixed at NRG Studios in North Hollywood, CA, Bad Magic contains an unheard of, bumper-sized 13 tracks, comprising 12 brand new Motörtunes and a truly epic cover of The Rolling Stones classic “Sympathy For The Devil”. 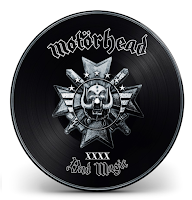 On December 16th, 2016, Motörhead's album 'Black Magic' will be available in a silver limited edition picture disc.
Posted by Jonny at 1:15 pm

Email ThisBlogThis!Share to TwitterShare to FacebookShare to Pinterest
Labels: Aftershock, Bad Magic, Lemmy, motorhead, The World Is Yours