The date comes hot on the heels of their UK & European Solas tour which has sold out in Glasgow, Newcastle, Holmfirth, Birmingham and Brighton. Tickets on sale Friday November18th at 9am. Support comes from Maverick.

A decade into the band’s career, the release of Solas marks a significant turning point for The Answer. (Read our review here.)

With much heralded reviews for the new album and comparisons to Led Zeppelin 3, The Answer are now being acclaimed for their more “Celtic-sounding” arrangements and instrumentation as they delve into a darker and more modern sound.

A decade into the band’s career, Solas marks a significant turning point for The Answer. Having gone back to their roots and rediscovered their inner selves Solas is an honest and brave album that panders to no label, to no media framework and to no rules. 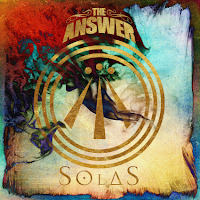 It is dark, occasionally menacing and at certain moments, joyous and uplifting. The symbol that sits on the front cover, the ancient Celtic sign for ‘illumination’, bears witness to this 2016 musical evolution. The Answer are firmly embarked upon a new journey.

The Ahoghill Jan 28th Diamond show has been postponed and will be rescheduled Spring 2017 (date to be announced); all previously purchased tickets for Ahoghill will be valid for the rearranged date.
Doors 7pm *EARLY SHOW* Tickets £15 + Booking Fee. 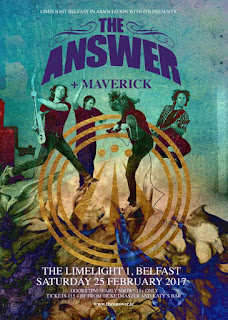