NEWS: The Quireboys to land with full electric set for two-night stand in the Diamond Rock Club

THE gypsies of rock 'n' roll, the troubadours telling tales of broken hearts, the men who can make you weep and smile at the same time, the band who have more melancholic melodies are coming back to Northern Ireland for a two-date stand.

They will play a full-electric set in the Diamond Rock Club, Ahoghill on Friday, April 7th and Saturday April 8th.

These will be the only dates on the island of Ireland on the Twisted Love Tour.

Spike and co have always been faithful visitors to Belfast and Ahoghill, and given the strength of the past number of albums, not to mention the bucket loads of hits to their name these are two nights that will shift like the proverbial from a stick.

Lauded as their loudest and proudest album for 25 years, Twisted Love screams heartache, passion, tears and tension. And it’s time for the record’s most powerful themes to be unleashed.

“We made this record with a full-on rock and roll show in mind,” said guitarist Guy Griffin. “The songs are some of the strongest we’ve ever written and that comes across best when all six of us are on stage and the volume is turned up.”

Not since the band’s early 90s heyday have The Quireboys sounded so compelling and so relevant. The bittersweet title track, bullish Breaking Rocks and terrific Ghost Train reveal a band going back to the future and back to what they always did best.

And if The Quireboys have proved themselves masters of an intimate and intriguing unplugged experience, then rocking out remains their traditional calling card.

“We played a handful of fully plugged shows in the UK earlier this year and the response to the new songs was tremendous,” added Griffin. “Those gigs gave us the confidence to dig deep into Twisted Love on the next tour and we can’t wait.”

Twisted Love is The Quireboys’ 10th studio album and the sound of a band enjoying a creative rebirth and a rich vein of songwriting form. More than 30 years after bursting onto the UK’s rock and roll scene their incendiary live shows continue to set the standard for the next generation of homegrown heroes. 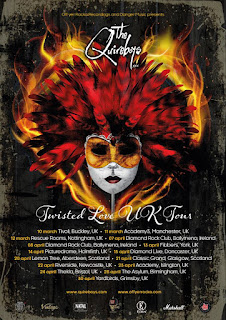