POP punk royalty Green Day are set to play Belfast as part of their Revolution Radio tour, with a June 28th show in Ormeau Park. Support comes from Rancid.

Both bands have played the city previously, include the by-now legendary début show by Green Day, which despite being attended by a few dozen many hundreds now claim to have been there.

Since those heady days Billy Joe Armstrong, Mike Dirnt and Tré Cool have sold more than 75 million albums, challenged the mainstream and recorded anthems for the soundtrack of many people such as 'American Idiot' and 'Misery' 'Basket Case'.

Despite being Grammy Award winners five times, being inducted into the Rock 'n Roll Hall of Fame in 2015 and playing to massive crowds across the world they have never given up casting a critical eye on society.

Tickets, priced £45 (+booking fee) go on sale this Friday at 9am from all usual outlets. 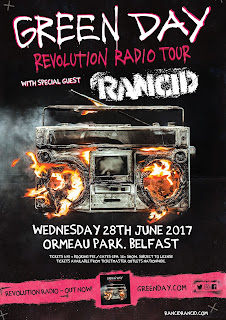