GIVEN that six years have passed since Fireland last released any recorded material, and guitarist and founder Steve Moore has been on Stormzone duties, you could be forgiven for thinking the fire had burned out into fading embers.

But, when earlier this year the first two albums were re-released there were smoke signals that more was to come, once more the flame was ignited and this month it is burning bright with 'Fireland III - Believe Or Die' out for metalheads delectation.

Ten tracks of classic metal are there for all to behold, but with a slight tweak to the Fireland sound, a more powerful overall vibe and more than a nod to developments across the UK and Europe, without losing the essence of Fireland.

Melodious guitar lines, riffs, choruses to delight and Moore wrangling his six-string into submission to wrench every last possible tone, this is nothing more than pure metal distilled down to its core.

True, there is nothing really ground-breaking, but that's not the point. This is what fans of classic metal want, no fuss, just great songs played well. 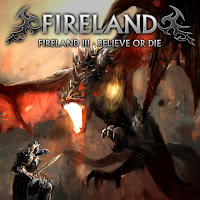 Drafting in David Brown of Chaos Frame, all the way from Delaware gives it an extra dimension to the sound and allows more room for Moore and drummer Chris Mawhinney to explore the dynamics.

Opening with a nod to 'Tallica on 'John Rock' the sense throughout the rest is a romp that will have everyone who cherishes metal of the early 80s beaming from ear-to-ear.

It is also refreshing to note that there are no abbreviated songs here., all well over four minutes in duration. However, it is on Fallen II - the sequel to the track from their 2008 release - that the band stretches its legs. Nine minutes plus of epic song writing and playing.

That said it is probably not the strongest lyrically, slipping into cliché at times, compared to the deeper and more exploratory words throughout the rest of the album, but that doesn't mean it isn't enjoyable.

Overall most tracks are strong - the only one that doesn't hit the highs of the rest of the album is perhaps 'Burning Scarecrow'. Having said that many a band would be happy to have that on their output and is only noticeable because of the strength of the rest of the tracks.

Songs like 'Hate Lives On' and 'Ironclad' make this a metal album that on first listen you let wash over you...on second listen you are sitting up and paying attention...on third listen your mouth will be aching as you smile and smile again.

Engineered , mixed and mastered by Moore at FireMachine Studio the sound has clear separation and a resonance that is needed for this type of record.

What is pleasing about this album is that Fireland show that there is much more to be explored in this variety of metal' - it's not about repeating the past, it's about bringing it back to life and showcasing it for 2016 and hopefully beyond.

This is an album deserving of gaining a wide listenership, and when they hear it heads will be a-nodding.

More information and lyric videos are available on www.fireland.tv 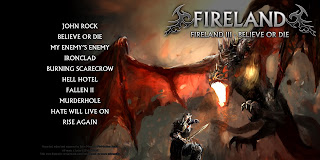