THEY have had many detractors over recent years, as In Flames have moved from their original Swedish melodic death metal roots, but seemingly they neither care, nor are they about to change direction.

And, on their latest platter they have continued their sonic evolution, and to hell with detractors. What is more the bands they took from to diversify their sound, and those influenced by them, will see on 'Battles' that In Flames have exceeded them, and left all wondering where the hell did that come from.

Lyrically melancholic, musically mature, well arranged, this is a stunner of a modern metal album. Sure those that want to compartmentalise In Flames with their early work will complain about this, that or the other but that is to miss the point. They are carving their own path and are ageing more than well. 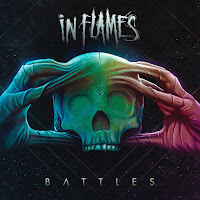 Björn and Niclas are on fire in eeking out guitar lines and riffs that have melody and power, as well as measured solos, such as on 'Through My Eyes'.


But, there is not a bad track amongst the dozen offered up here. Anders sounds pained throughout, and the whole feel of the words is one of someone looking back on their life, their choices, those that have hurt, and those who could, if they want heal. Being released at the tail end of 2016, one could imagine sitting back reflecting on the year on New Year's Eve, a wee dram at the side to sip on reflectively.

The title track is magnificent, with real groove and purpose in the melody, while 'Here Until Tomorrow' is plaintive and that purity of bathos resounding in its music and words.


The band admit that the album came together much quicker than they intended after Anders and Bjorn took a break in LA, where the whole thing came together more quickly than intended.


However, some may frown at the choice of producer, Howard Benson, who is perhaps best known for his work with My Chemical Romance and The Used, but the evidence on 'Battles' is such that it proved to be a sage decision. He has not tried to change In Flames, and while the effects and occasion electronica is there, it is restrained and purposeful.


The closing pair of tracks showcase this well, with seven minute plus 'Wallflower' exuding musical mastery. It is metal, but not shackled as the song grows with fantastic flourishes of guitar, all propelled by Peter's bass. Delicate elements sit ready for the delivery of the might.


Closer 'Save Me' has perhaps the most effects, but there is real meat as it emerges as a powerful piece of metal poetry, with a chorus rock bands and pop punks would sell their souls and right legs to have in their repertoire, never mind the middle eight and the restrained beauty of the guitar line halfway through.


And, if you don't like to even consider a metal band producing choruses this good...this is what Anders has to say.


“The beautiful thing about this band is that you can do whatever the fuck you want and that's the whole point of the music because all of the restrictions and labelling kills it in a way,” he said.


“This time around we had the Howard filter to come in and give us a new perspective on how we could approach these songs, but ultimately what it comes down to is very simple: Is it good or is it bad? If it's something that all of us can stand behind and be proud of then we know that it's an In Flames song.”


Or to put it another way, if you have a mate who likes his rock, but is wary of tip toeing into metal., then buy them this for Christmas, he'll thank you for the rest of your life.


At times we have been reserved about this type of evolution in metal: it is after all easier to allow yourself to close off an act when they change, or step outside pre-conceived borders, but In Flames have pulled something extraordinary out of the bag, something poignant, something powerful and something that will be long listened to by those prepared to open their ears.


Review by Jonathan Traynor
Posted by Jonny at 5:57 pm