He has claimed that new management for Living Colour "knowingly" booked them onto the Alter Bridge tour although they were already confirmed for the Glenn Hughes co-headline tour, which had been on sale since April.

Alter Bridge and Glenn Hughes have been long-time friends and neither Alter Bridge, their management and agents or even Living Colour’s agent TKO were aware that this was taking place.

Glenn Hughes was planning on touring Europe in support of his upcoming solo album, Resonate.

Allegedly, when word got to promoters that Living Colour were no longer planning to perform on the
co-headline dates, they were forced to refund all tickets. All ticket holders of Glenn Hughes’ UK and European tour will be offered refunds at the point of purchase and can call the venues for more information.

“I am saddened and disappointed that I will not be able to perform for my UK and European fans as I had originally intended,” explained Hughes.

“When I partnered with Living Colour to do this tour, I thought we would be able to make something special happen at these shows. 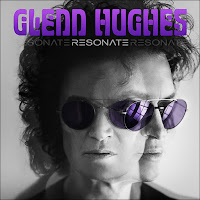 "I can’t wait to get back to the UK and Europe to bring the new songs of ‘Resonate’ to my fans overseas.”

The album will be available in two configurations: regular cd and deluxe edition including one bonus track and DVD. The Deluxe Edition includes the bonus track ‘Nothing’s The Same’, plus a bonus DVD disc featuring the ‘Making of’ the album documentary – ‘Heavy’ (song video), and ‘Long Time Gone’ (song video). A vinyl release will be made available via the Frontiers’ label partners Soulfood Music.

The single ‘Heavy’ is available on Spotify at http://radi.al/ResonateSpotify with the full album streaming on release date. Resonate was produced by Glenn Hughes and Soren Andersen.