When people talk about the so-called 'Big Four' of thrash metal, you'll often hear “but I think it should be Big Five, because (insert their favourite thrash band here) should be included”

Often, the band in question is just as talented as those in that top four are, they just inexplicably never hit the same lofty heights of fame.

All of which brings us neatly to Sunday night's Limelight gig, which saw thrash legends Onslaught hit Belfast again, this time to celebrate the thirtieth anniversary of their classic album The Force, ably supported by a plethora of both local and national acts.

First up it was time for local thrashers Scimitar to strut their stuff, and they stepped up to the plate in confident and polished fashion. Beginning with the immediate and sizzlingly fast 'Behead the Beast', they fill their set with no-frills, balls out thrash, to the delight of the crowd. Tight and forceful, their hefty set leaves everyone warmed up and thirsty for more.

Speaking of thrash legends...next up it's Suffolk's own recently reformed Anihilated, whose return to the metal fold sees them filled with renewed vigour and enthusiasm.

Tight as their well-pounded snare drum, they fire out hit after hit with roaring thrashy power. “I heard you were a bunch of badass metal motherfuckers, and it seems they were right!” frontman Si Cob yells approvingly following the crowd's response to 'They Lie, We Die'. Definitely a band from the 'play as fast as you can' Slayer end of the thrash spectrum, they set heads banging all over the room; final track 'We Are Legion' is a particular highlight.

A band at the proggier end of metal is up next: it's Coventry's Beholder. Fronted by Bloodstock man Simon Hall, who bellows “good evening Belfast? Are you ready for this?!” prior to their opening number, they have always been a metal band with a strong social conscience, fundraising for the Sophie Lancaster Foundation and writing issues close to their heart.

They also – if you'll pardon the pun – are a sight to behold onstage, pouring all their energy into their performance. Hall in particular wrings every last ounce of effort from himself as he roars, growls and hollers throughout their powerful 45 minute set.

Tonight, we hear songs both old and new, including 'Razorline (On the Edge of Insanity)' from their first album (“something faster for you thrashheads” grins Hall) and pacy and atmospheric newie 'My Revolution'.

It's always a pleasure to witness this charismatic and dynamic band.

A siren intro and classical music heralds the arrival of the band that everyone is here to see: as Onslaught file onstage they receive a rowdy heroes' welcome from the crowded room, which only gets louder as they launch into track one of The Force, 'Let There Be Death'.

It becomes immediately clear that, despite the passing of time, there has been no dimming of their enthusiasm – they're like excited young pups onstage – or of frontman Sy Keeler's vocals, which show an astonishing strength and range. “It's a fucking pleasure and honour to bring The Force to this wonderful city!”, he enthuses. Briefly mentioning their legendary Mandela Hall gig, they continue on with a frantically energetic 'Fight the Beast', followed by an even faster 'Demoniac'.

With little pause between tracks, they fire through the album like a rocket launcher. And by the gods does it sound good: epic, majestic and rowdy, it's as fresh and exciting as if it had been recorded this week. The thunderous and atmospheric 'Flame of the Antichrist', the masterful 'Contract In Blood',
the blistering 'Thrash Til the Death'...all simply outstanding.

The album completed, they spend the remainder of their set treating the crowd to a mini tour through the rest of their back catalogue. 'Killing Peace' gets an airing, as does a ferocious 'The Sound of Violence', a furious 'Destroyer of Worlds' and of course '66Fucking 6', which sends the room into paroxysms of delight.

They finish up with the 'one-two punch' of 'Power from Hell' and 'Thermonuclear Devastation', before Keeler announces “thank you Belfast, you've been fucking awesome!” and they all depart the darkened stage.

But of course, it's not over yet...to roars of approval, and because Belfast is so fucking awesome (and despite the house lights already being on) we are treated to one last song: a rabid 'Angels of Death'. Perfect.

'The Big Four', 'The Big Five', 'The Big However Many' – the debate will no doubt continue to rage as to who are the best thrash bands in the world. Based on tonight's damn near flawless  performance, Onslaught are definitely up there with the big boys. Keep on thrashing, lads! 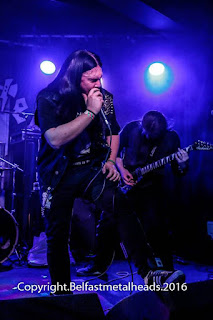 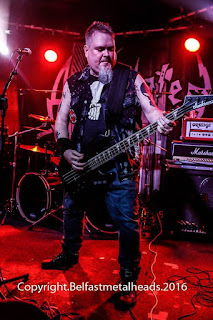 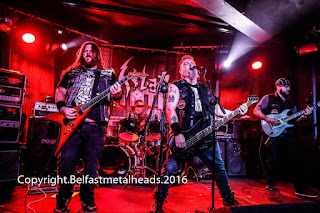 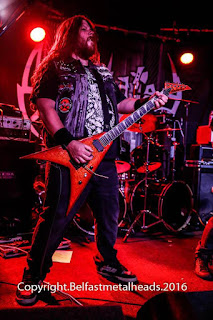 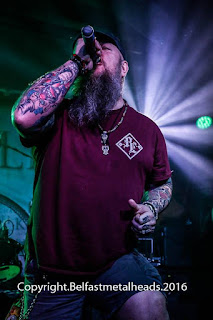 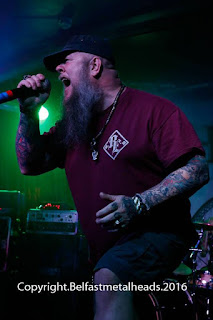 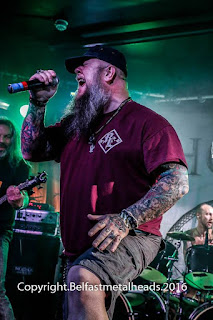 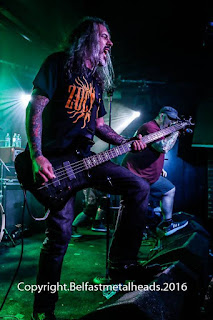 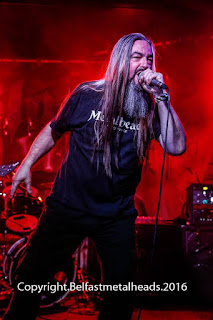 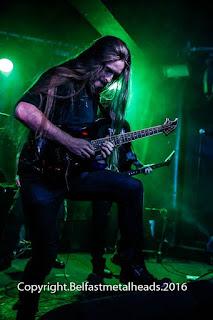 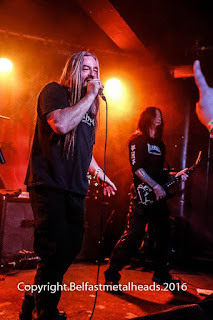 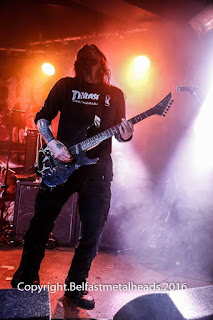 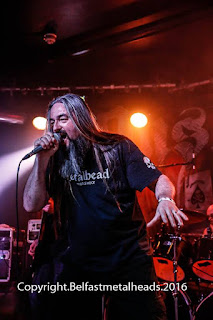