IT'S hard to think that Piotr 'Pete' Wiwczarek has been guiding the Vader empire since the early 1990s, when death metal was just a name thrown about at random. Those early iterations of the band owed more to thrash than what the band became, but in 2016 they are truly death.

'The Empire' is a testament to the band's journey, with some echoes of the past and a contemporary take on their sound.

It is an album of 10 short sharp punches to the ears, but within each there are subtleties that are only revealed upon the second or third listen...indeed only after a listen on headphones did some of these become clear.

Driven along by James frenetic and furious drumming throughout this is an album that will stand the test of time. The first three tracks are a headlong rush, with 'Prayer To The God Of War' a stand-out. 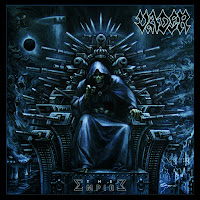 But this is not a monochromatic release, all played in the one style. 'Iron Reign' has more dynamics in its mid-paced structural elements, as well as having an arrangement that shouts "classic" in the Vader live repertoire including some stunning guitar work by Marek.

This may be the 13th album released by the Polish veterans, but it is worth recalling that apart from founder Peter, the rest of the current line-up have only been under the Vader name since 2011. But in those five years they have melded into a potent force.

The EP release earlier in the year of 'Iron Times' was but a taster for this. What was good about the songs there have been elevated to a collection of great death metal songs.

The sheer relentless pace of 'No Gravity' takes the template from some of the songs on 2014's 'Tibi et Igni' and adds more flourishes and a compact yet searing solo.

Across the release the lyrical content is pretty much what you'd expect from Vader, but there are some moments, such as on 'The Army-Geddon' when little twists are thrown in to the mix, as well as an almost trippy solo.

It is the overall production, mixing and mastering that gives a 'fresh' sound. Wojtek and Slawek Wiesawski are to be complimented on extracting this while sequestered with the band in Hertz Studios.

But what stands out most on this is the cohesiveness of each track. Sometimes an album almost has a 'tell' about who is the star, and what the supporting cast is, by some of the ways songs are laid out, arranged and, indeed mixed. Not here. Peter, Marek, Hal and James sound like a single unit, a group devoted to their own nefarious plans.

Closer 'Send Me Back To Hell' is the perfect example of this, mid-paced roll, while James adds the type of fills and blasts that are more than just for effect, but add to the song.

'The Empire' of Vader's metal has always been set within confined boundaries of genre-restrictions and those too prejudiced to listen a little outside the proverbial box but this is one release that should stretch its audience beyond the gates, and expand their empire of followers.