HAWKWIND and Pendragon will be among those heading up this year's HRH Prog (15th-18th November, 2018).

“We’re proud to deliver what’s got to be the biggest, best, residential prog festival on Planet Earth,” says HRH’s Progster-in-Chief Jonni Davis, “There will be 27 bands in total, including acts that shaped prog and much more.”

Hawkwind will be a headline act. First formed in 1969, the band has gone through more incarnations and evolution than Doctor Who and Charles Darwin combined, with founder Dave Brock remaining a constant presence throughout. Famed for their psychedelic, spacey sound (and of course landmark tracks like Silver Machine), Hawkwind will bring solid prog to the party.

Pendragon hail from 1978 and played a major part in the progressive rock revival of the 80s (along with bands like Marillion, with whom they often performed, both on tours and at the Marquee). If you’re a lover of great neo-prog, be sure to catch their set.

The Strawbs have long been a favourite flavour among the HRH Faithful. HRH Prog VII will give fans a great chance to see this excellent band.

There’s also a great chance to see The Crazy World of Arthur Brown. Fire became one of the Sixties’ greatest one-hit wonders whilst Arthur’s fiery antics onstage made for spectacular shows, notoriety (and reportedly got him kicked off Jimi Hendrix’s tour!). He has, however, influenced countless musicians and performers (like Peter Gabriel, David Bowie, Kiss, and Alice Cooper) thanks to due to his madcap look, persona and flamboyant performance, not to mention his operatic vocal style, which influenced prog and heavy metal. See this prog pioneer, live and first-hand, at HRH Prog VII.

HRH will also be announcing another wave of bands to fill up the second arena, taking it to an impressive 27 acts over the festival’s long weekend. 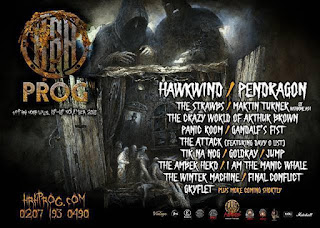